Along the Washington Irving Trail in Oklahoma; [Reprint from the Chronicles of Oklahoma article, Oklahoma Historical Society V.35, No. 1] 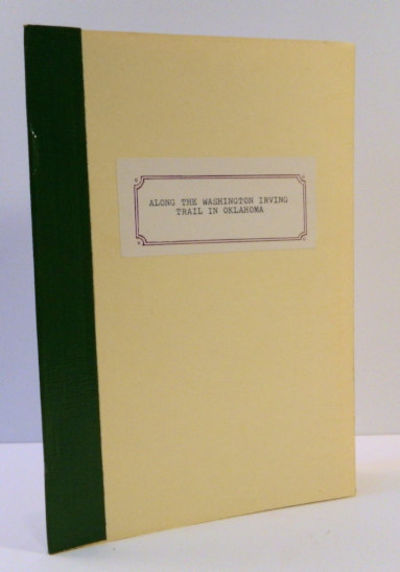 by Shirk, George H.
Oklahoma City: Oklahoma Historical Society, 1957. First Edition. Fine. [9x6in]; [1] map, [95-110] 16 pp., fold out 1957 map [9x15.75in] with original 1832 route by Irving and 1957 trail route with dates and places of Irving camps, bibliographic references; Cream paper wrappers, two staples, with green tape backstrip and typed paper label on front; Negligible shelf wear to booklet or map. Washington Irving (1783-1859) was an American author, historian and diplomat in the early 1800's. He is one of the first American authors acclaimed in Europe with the short stories of Rip Van Winkle (1819) and The Legend of Sleepy Hollow (1820). In 1832, after returning to the United States from a 17 years in England, he was a successful and famous author and wanted to see the American frontier. He was accompanied by Charlie Joseph Latrobe, an Englishman, and Alexander de Pourtales, a 19 year old Franco-Swiss Count. They met Judge Henry Leavitt Ellsworth on a Detroit Steamer on Lake Erie, whom President Andrew Jackson had appointed to the Board of Commissioners to remove the Southern Indian Tribes west of the Mississippi River. Ellsworth invited the group to join him in a month long tour of unexplored Indian country (present day Oklahoma). They arrived at the Ft. Gibson to meet with a group of Rangers on a reconnaissance south to the Red River. Irving was 49 and more of a bon vivant than a frontiersman, and this trip was an exciting time of discovery for him. He kept a journal and the book, The Tour on the Prairies, published in 1835, is filled stories of the people they met, the landscape and the adventures. This short article, from the 1957 Chronicles of Oklahoma in the Notes and Documents section, was designed as a detailed modern tour guide of Irving's 1832 route '... with a minimum of unpaved roads and with all necessary instructions for staying close to the path of Irving's famous loop through the western wilderness." The article was first published in the Chronicles in 1947 and then later under a different title in 1967. (Inventory #: 13784)
$35.00 add to cart Available from
David Spilman Fine Books
Share this item