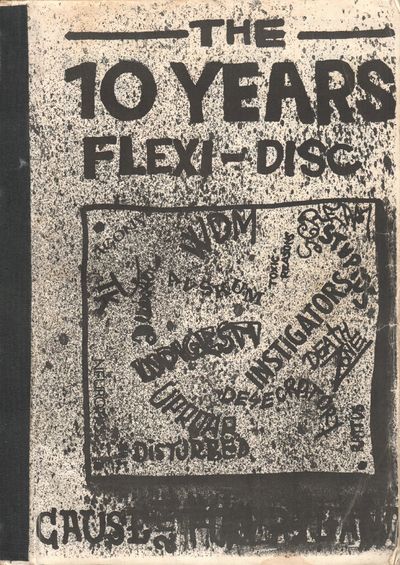 [London: Palach Press, 1987]. Quarto (29.8 × 21.5 cm). Original xeroxed wrappers designed by "Pepíno Třináctí"; rear wrapper with hand-lettering (black marker?); cloth spine strip; 45 leaves of photo-reproduced typescript, photographs, and other decorative elements. Light wear to wrappers; still about very good. A bit of a mystery, this elaborate punk zine is variously referred to on Czech punk-themed blogs as having been either the translation of a British punk zine, or having been produced in London. Although we cannot locate a single institutional holding either in the Czech Republic or in foreign holdings accessible via KVK, OCLC, we traced a single reference in Wagstaff, British Union Catalogue of Music Periodicals, based on the holding at the Bodleian Library, which attributes the zine to Palach Press in London. Named after Jan Palach, a Czech student who self-immolated on Prague's Wenceslas Square in 1969 to protest against the Soviet repression following the Prague Spring, the Press was founded in 1974 by Jan Kavan, who left Prague for London in 1968. It was influential in trafficing literature in and out of Czechoslovakia, and became crucial to disseminating the Charta 77 petition in Western Europe. Kavan later returned to the Czech Republic, where he has held numerous political positions. The zine gathers reviews of and interviews with band members of The Stupids, The Neurotics, Avskum, The Disturbed, The Instigators, a lengthy illustrated article on the punk scene in Poland, the Polish band Dezerter, lengthy illustrated articles on punk in Finland, Germany detailed news about various new LP and EP releases, contact information for distributors and agencies. From the point of view of Czech punk, the zine is particularly interesting for a longer history of the punk movement in Pilsen, Czechoslovakia. Finally, there are three pages of addresses of punk zines and journals from across Europe. (Inventory #: 50930)
$750.00 add to cart or Buy Direct from
Bernett Penka Rare Books
Share this item