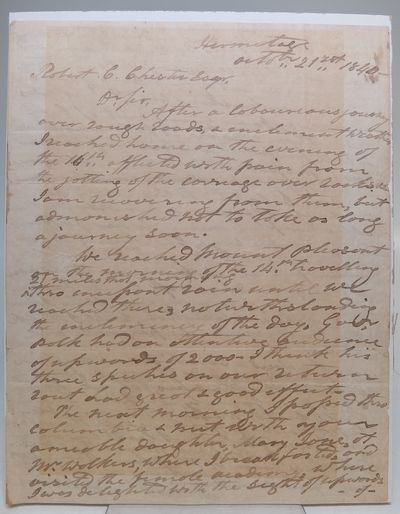 by JACKSON, Andrew (1767-1845)
Hermitage, 1840. very good. Exceptional A.L.S., 4to. 2 pages, The Hermitage, October 21st 1840, to Robert Chester, Marshal of the Western District of Tennessee, appointed by President Martin Van Buren. Light toning otherwise boldly signed and in very good condition. JACKSON, Andrew (1767 - 1845). Seventh President of the United States. With Election Day approaching Andrew Jackson and James Polk stump in their native Tennessee in a last-ditch effort to secure the state for Martin Van Burn! He was also married to Jackson's niece Elizabeth Hayes and was considered an important member of his inner circle, in part: After a laborious journey over rough roads and inclement weather I reached home on the evening of the 16th afflicted with pain from the jolting of the carriage over rocks. I am recovering but am admonished not to take as long a journey soon. We reached Mount Pleasant on the morning of the 14th traveling 21 miles that morning thru incessant rain until we reached there. Notwithstanding the inclemency of the day, Governor Polk had an attentive audience of upward of 2000. I think his three speeches on our return route had great and good effect.The next morning we visited the female Academy where I was delighted with the sight of upwards of one-hundred grown ladies whose morals and minds are well attended to, and bid fair to act well their part in the improvement of the rising generation. What an interesting sight this was to me as I am going out of life, to see those who are to take our place so well prepared to perpetuate by their intelligence our happy Republican Institution. I was delighted to see your daughter Mary Jane the perfect figure of her dear Mother. She says she wants to go home what a pity you have not your Female Academy in operation where your dear wife could have her under her own eye although I think well of the Institution, still I think the Mother's care superior to all others. Andrew and Sarah [stepson and wife] joins me in the kindest regards to you and your family, to Dr. Butler, General Hays I would write but am at present unable. JACKSON AS POWER BROKER: James Polk became a U.S. Congressman from Tennessee in 1825 and immediately became a strong supporter of Andrew Jackson and his most prominent House ally during the "Bank War". In 1840, Polk campaigned in vain for Martin Van Buren and was embarrassed by the outcome of the election. To make matters worse he himself was defeated in 1841, losing the Governorship of Tennessee; a victim of the Economic Crisis of 1837. In 1844 Van Buren voted against the Annexation of Texas a move which effectively extinguished any support that he would have received from the South as a Presidential candidate. With the strong support from Andrew Jackson Polk was convinced to become a candidate at the Democratic Convention that same year. Being from the Southwest and a supporter of Annexation he emerged as the Parties nominee after Van Buren failed to win the required two-thirds majority of delegates. Jackson had switched his allegiance from Van Buren to Polk and had secured an assurance that John Tyler would not run as an Independent candidate for the Presidency. (Inventory #: 297038)
$7,000.00 add to cart or Buy Direct from
Argosy Book Store
Share this item