ONCE UPON A DREAM: A PERSONAL CHAT WITH ALL TEENAGERS 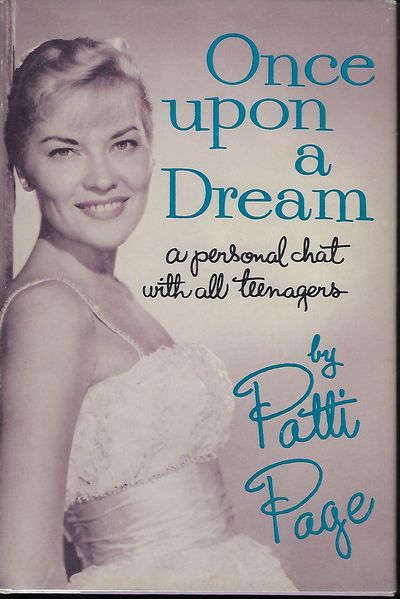 by PAGE, Patti
Indianapolis: Bobbs-Merrill, 1960. First Edition. Signed presentation from Page on the front endpaper: "For Bill Morris Jr. The O.U Kid!! With best wishes Patti Page. June 24, 1960." Clara Ann Fowler [1927-2013), known by her stage name Patti Page, was an American singer of pop and country music and occasional actress. She was the top-charting female vocalist and best-selling female artist of the 1950s, selling over 100 million records during a six-decade long career. She is remembered for such hits as "Tennessee Waltz" and "How Much Is That Doggie n the Window." Her "Tennessee Waltz" was one of the biggest-selling singles of the 20th century and is recognized today as one of the official songs of the state of Tennessee. The recipient of this book is believed to be William Morris Jr. [1899-1989], who was an American talent agent and former president of the William Morris Agency, who had Patti Page as a client. Under his tutelage, the William Morris Agency became one of the world's largest talent agencies. 8vo., cloth & boards in dust jacket; 191 pages. Illustrated.. Very Good (covers very nice; contents clean & tight); very minor wear d/j. (Inventory #: 57016)
$100.00 add to cart or Buy Direct from Antic Hay Books
Share this item
Antic Hay Books
Offered by

PART OF MIDDLETOWN TOWNSHIP. From Wolverton's "Atlas Of Monmouth County," 1889

by CLARK, James A. [With Michel T. HALBOUTY]

NY : Random House , 1972
(click for more details about THE LAST BOOM)
View all from this seller>