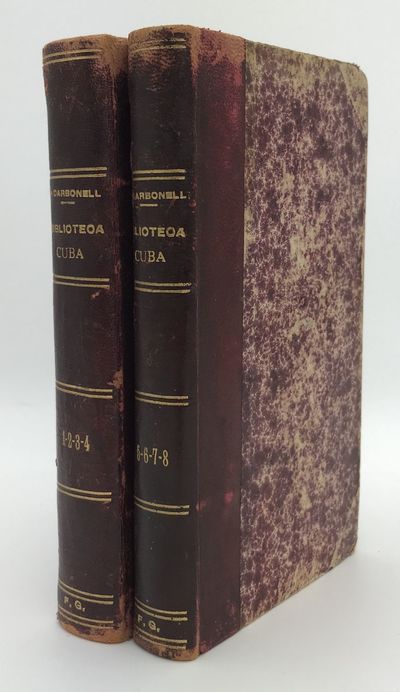 by [Cuba]. [Literature]
Havana, 1916. Good plus.. Eight parts in two volumes. Original half calf and marbled boards, spine gilt. Calf scuffed at spine ends; light wear to corners and edges; boards rubbed. Rear board with a dime-sized chip at lower fore-edge. Slightly later pencil ownership inscriptions to initial title pages of each volume. Small chip at fore-edge of first title page. Light tanning. The first eight issues of this scarce Cuban literary periodical, which published twice monthly during 1916. The editor of the series, Nestor Carbonell y Rivera, grew up in the United States before returning to Cuba and obtaining his doctorate from the University of Havana; he was active in several prominent intellectual and literary society of Cuba, and later served as ambassador to Argentina and Peru. Each issue of the periodical comprises one previously unpublished work by Cuban author including José Martí, Manuel Sanguily, and Máximo Gómez. We locate runs of the series at seven institutions, as well as scattered holdings of individual issues. This set clearly bound by a contemporary Cuban subscriber, one F. Gamboa. (Inventory #: 1505)
$450.00 add to cart Available from
McBride Rare Books
Share this item