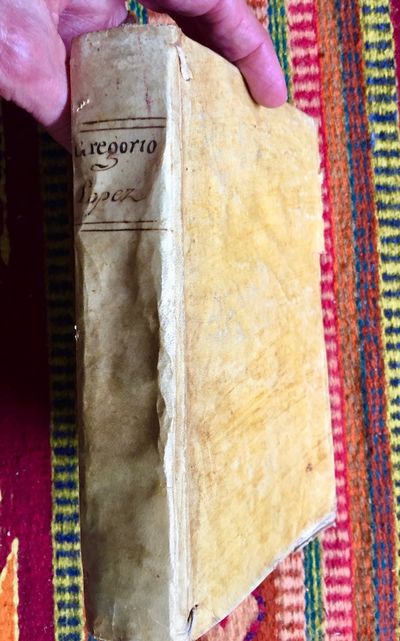 by Losa, Francisco
Madrid: Bernardo Hervada / Antonio Francisco de Zafra, 1674 / 1678. Small octavo19.5 x 14.5cm, ff [6], [116]; [16], pp 121, ff [3]. Extra-illustrated by a portrait engraving of Lopez taken from another source and pasted on the verso of the title page, and lovingly, if crudely, colored at some remote time. Two volumes bound as one: note that the first volume is paginated by leaf, so there are 276 pages, all in two columns, a lengthy biography. The second volume is a printing of Fr. Cobo's transcription of Lopez' lucubrations about the Book of the Apocalypse. Lopez (1542 - 96) was an interesting figure: born in Spain, rumored to be a natural (i.e. illegitimate) son of Phillip II, though he was a page in the court of this king. He was well-educated in arts and sciences, and came to Mexico at the age of 20, living intermittently as a hermit and monk. For some time no one knew what to make of him, as he did not belong to any religious order: the natives, even the unconquered Chichimecas, thought he was perhaps a brujo (witch),but revered him and helped him construct a hermitage; the Inquisition suspected he was some kind of Lutheran heretic. He overcame all suspicion over time, and became a venerated personality. He was revered by F. Losa, his biographer and close friend, who left his parish to go live with Lopez as a hermit outside of Mexico City in a place called Santa Fe. Lopez ended his days there, uniformly mourned as a saint throughout Mexico. At one point in his life he became seriously ill from dysentery and entered the hospital de Huaxtepec, which had an extensive herbal garden which had existed from Aztec times, and of which he became the keeper and dispenser. His book Tesoro de la Medicina was the basic guide for medical treatment for two centuries, "un mezcla de recetas, remedios y practicas populares de curacion." Of particular interest was his use of an aztec herb that had an anesthetic effect for up to two hours. His treatise on the book of Apocalypse is also of interest, showing his mystical (iluminado) tendencies, and was dictated over a period of a week, while he was recuperating in that hospital, to a Father Cobos, and was immediately circulated and printed. This is a venerable copy, in the original vellum, with hand-lettered title on spine. Paper is age-toned, binding is fragile but sound. Very good. (Inventory #: 7532)
$2,250.00 add to cart Available from Plaza Books
Share this item