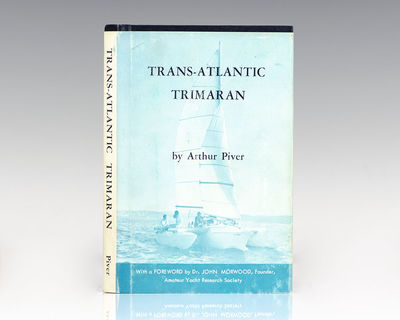 by Piver, Arthur
San Francisco: Underwriters Press, 1961. First edition, second impression of Arthur Piver's terrifying and wonderful account of his trans-Atlantic voyage above his 35-foot ketch-rigged trimaran Lodestar. Octavo, original cloth, illustrated, charts to the verso of the dust jacket. Foreword by Dr. John Morwood. From the library of James Stephen "Steve" Fossett with his bookplate to the pastedown. American businessman and record-setting aviator Steve Fossett became the first person to fly solo nonstop around the world in 2002 in his 10-story high balloon Spirit of Freedom. He completed the 2002 trip in 13 days, 8 hours, and 33 minutes and set records for both the Longest Distance Flown Solo in a Balloon and Fastest Balloon Flight Around the World. Fosset was also one of sailing's most prolific distance record holders set the Absolute World Speed Record for airships with a Zeppelin NT in 2004. He received numerous awards and honors throughout his career including aviation's highest award, the Gold Medal of the Federation Aeronautique Internationale (FAI), which he was awarded in 2002. Fossett disappeared on September 3, 2007 while flying a light aircraft over the Great Basin Desert, between Nevada and California. Fine in a fine dust jacket. Arthur Piver's Trans-Atlantic Trimaran is not only an engrossing adventure story, but an account of the evolution of Piver's multihull seafaring trimaran. "It was Arthur Piver's bang-'em-together, sheet-plywood boats that launched the modern multihull movement in the early Sixties--simultaneously setting its advancement back a dozen years. It wasn't Piver's fault that so many backyard builders erected condominiums atop his slender hulls, giving multihulls an ugly duckling reputation from which they're only now recovering" (Thomas,1985). (Inventory #: 114843)
$55.00 add to cart or Buy Direct from
Raptis Rare Books
Share this item

1906
(click for more details about Enrico Caruso Signed Postcard.)
View all from this seller>