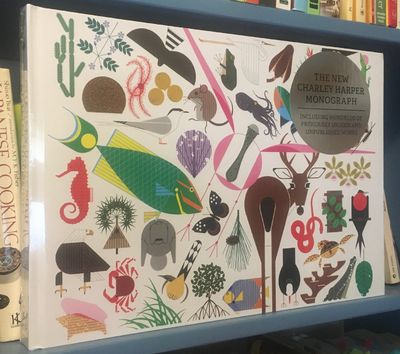 by Oldham, Todd
Hardcover with glossy, illustrated boards, 44.7 by 31.5 cm, [288] pp., heavily illus. in color. As new, still sealed in the publisher's shrinkwrap. Includes an 8-page exhibition guide for a Harper exhibit at the Kalamazoo, Michigan Nature Center in 2015 (Staple-bound self-wraps, color, fine). From the publisher: "Celebrated designer Todd Oldham opens another treasure trove of unseen and unpublished illustrations in the new AMMO Books release, Charley Harper's Animal Kingdom. Todd has done it again by going deeper into Charley Harper's extensive archive to create the ultimate companion to 'An Illustrated Life' and present the absolute best of Charley's previously hidden illustrations. Ranging from bugs and birds to all creatures of land and sea from the bountiful imagination of the artist, animal lovers and fans of Charley alike will be thrilled with this stunning new collection. Featuring more than 300 previously unseen illustrations, Charley Harper's Animal Kingdom includes illustrations created during a span of more than sixty years and appeals to a wide range of audiences both young and old." (Inventory #: 3704)
$70.00 add to cart Available from Bay Leaf Books
Share this item

An Account of the Earl of Peterborow’s Conduct in Spain, Chiefly since the raising the Siege of Barcelona, 1706. To which is added the Campaign of Valencia. With Original Papers [Peterborough]

London : Printed for Jonah Bowyer , 1707
(click for more details about An Account of the Earl of Peterborow’s Conduct in Spain, Chiefly since the raising the Siege of Barcelona, 1706. To which is added the Campaign of Valencia. With Original Papers [Peterborough])