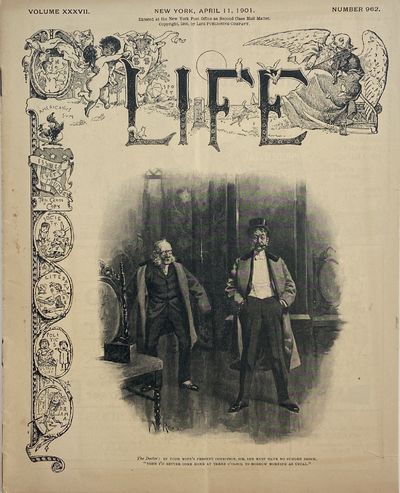 New York: Life Publishing Company, 1901. Ephemera no binding. Near fine. 4to (11" x 8 ¾"); pp403-415 [3]; [16pp]; printed wrapper with large decorative nameplate on front wrapper, humorous caricature illustration below, advertisements to rear wrapper; half-tone illustrations; light vertical fold; near fine. The weekly magazine simply named, Life, had its start in New York City in 1883, and was in competition with two other humor magazines, Judge and Puck. The magazine motto, appearing with the masthead, was "While there is Life there's Hope". The magazine was a success and leading illustrators included Charles Dana Gibson, Palmer Cox, A.B. Frost and Oliver Herford. Articles include witty and biting social commentary, poetry, and political satire. The front wrapper features a satirical cartoon by artist, F.W. Read. The centerfold cartoon is titled "A Widow and Her Friends, XXI. They all Go Skating", by Charles Dana Gibson, and features a young, pretty woman helping a line of 7 men out of the ice. (Inventory #: 1113)
$50.00 add to cart Available from
Sandra L. Hoekstra
Share this item

The New Album of New York

No place listed : Elliott Blaine Henderson , 1911
(click for more details about Uneddeekayted Fo'ks, Poems)
View all from this seller>