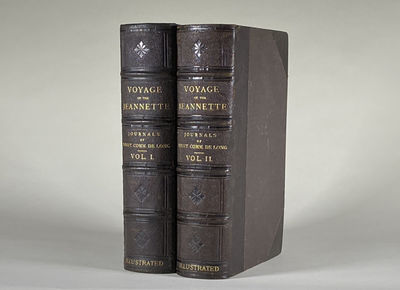 
DeLong sailed from San Francisco in July 1879 with the intention of sailing through the Bering Strait and then enter the Pole byway of the New Siberian Islands and Wrangell Island. The last sighting of the Jeannette was at Wrangell Island during the first two years of the voyage. In the space of those two years the crew struggled against the ice and extremely harsh conditions, but he was unable to save the ship which was ultimately crushed by the floes. The crew escaped, but several perished in a storm, and several of those who reached land died from starvation and extreme conditions. This extensive account of the tragic Voyage of the Jeannette was edited by DeLong's widow, Emma DeLong. (Inventory #: IASX.1019)
$1,500.00 add to cart Available from
Chet Ross Rare Books
Share this item
Chet Ross Rare Books
Offered by