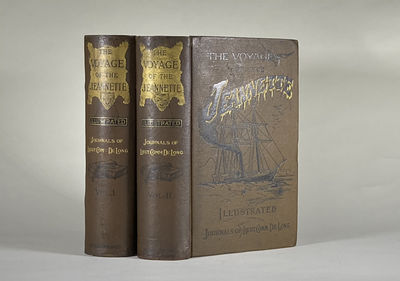 by DeLong, George W., DeLong, Emma — Editor
Boston: Broughton, Mifflin and Company 1884. 2 Volumes. Thick 4to, Volume I: (xii) 440pp., engraved portrait of George W. DeLong as frontispiece with tissue guard, 2 steel engraved plates, 6 wood engravings, 26 vignette illustrations, 8 maps and charts including foldouts. Volume II: (x), 470pp -- page numbering continuous between volumes and totally 911pp., Index, frontispiece tinted color lithograph entitled Cairn Tomb, Monument Hill, Lena Delta, 7 engravings, 15 vignette illustrations, 16 maps, charts and diagrams including foldouts. Overall in Very Good+ condition – no foxing, folds or tears, prior ownership 1" dia. seal on second free end leaf, end leaves professionally replaced, hinges uncracked and strong – a clean and bright copy.
—Arctic Bibliography 3839
DeLong sailed from San Francisco in July 1879 with the intention of sailing through the Bering Strait and then enter the Pole byway of the New Siberian Islands and Wrangel Island. The last sighting of the "Jeannette" was at Wrangel Island during the first two years of the voyage. In the space of those two years the crew struggled against the ice and extremely harsh conditions, but they were unable to save the ship which was ultimately crushed by the ice. The crew escaped, but several perished in a storm, and several of those who reached land died from starvation and extreme conditions. This extensive account of the tragic voyage of the "Jeannette" was edited by DeLong's widow, Emma DeLong. (Inventory #: STTX.313)
$750.00 add to cart Available from
Chet Ross Rare Books
Share this item
Chet Ross Rare Books
Offered by

Boston : Houghton, Mifflin & Co. , 1883
(click for more details about Voyage of the Jeannette The Ship and Ice Journals of George W. Delong, Lieutenant-Commander U.S.N., and Commander of the Polar Expedition of 1879-1881)