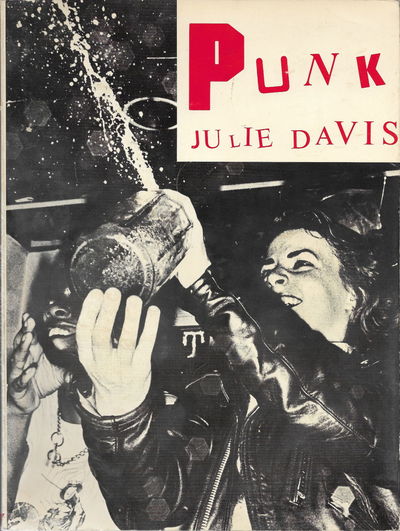 by Davis, Julie, ed.
Wraps, 20.8 by 27.9 cm, [128] pp., illus. Light rubbing and wear to the wraps and a light dampstain running along the spine that can only be seen on the spine-edge on the back cover and the gutters. A scarce, early book on [mostly] British punk, just a year into the movement, as it happened by those making it happen. An assortment of show reviews, interviews and editorials from young women and men who "have been putting together their own magazines about punk rock for the last year." Some of the authors include Jane Suck, Nag, Sex Ade, John Goto, Alan Anger, Charlie Chainsaw, and Erica Echenberg, covering the Damned, Slits, Cortinas, Television, Adverts, Buzzcocks, Vibrators, Siouxsie and the Banshees, The Boys, Johnny Thunder and the Heartbreakers, Alternative TV, The Lurkers, The Jam, Generation X, Sex Pistols, Chelsea, X-Ray Spex, Ramones, 999, Slaughter and the Dogs, Johnny Moped, Stranglers, Eater, Squeeze, Penetration, XTC, and the Clash. Interviews include Dave Vanian of the Damned, the Slits, Pete Shelly of the Buzzcocks, TV Smith from the Adverts, Ian "Knox" Carnochan of the Vibrators, Siouxsie Sioux, Paul Weller of The Jam, Poly Styrene from X-Ray Spex, Johnny Ramone, etc. A few of the editorials include "Girl Bands" and "Fascism" by Lucy Toothpaste, "Sod the Press" by Alan Anger, and "Sex and Mental Oppression" by Tony D ("I'm not IN ANY WAY saying that the way to topple the system and achieve physical and mental freedom is by becoming a sexless moron…"). Heavily illustrated with superb images, and the final page lists addresses for the contributor's zines including 48 Thrills, Ripped & Torn, Strangled, and Shews. A wonderful book. (Inventory #: 3717)
$120.00 add to cart Available from Bay Leaf Books
Share this item

An Account of the Earl of Peterborow’s Conduct in Spain, Chiefly since the raising the Siege of Barcelona, 1706. To which is added the Campaign of Valencia. With Original Papers [Peterborough]

London : Printed for Jonah Bowyer , 1707
(click for more details about An Account of the Earl of Peterborow’s Conduct in Spain, Chiefly since the raising the Siege of Barcelona, 1706. To which is added the Campaign of Valencia. With Original Papers [Peterborough])