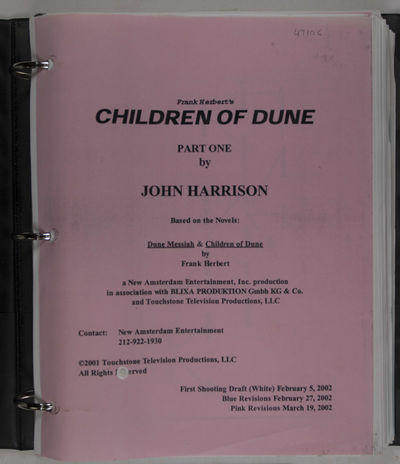 by Harrison, John (script by); Frank Herbert (novels by)
Touchstone Television Productions, 2002. Ring_bound. vg+ to near fine. A 9 1/2x11 3/4" black three-ring binder, housing the shooting script for the television production of Frank Herbert's "Children of Dune", the Sci-Fi Channel's follow-up to their previous adaptation of the first novel on the Dune series two years previous. The production starred Alec Newman, Julia Cox, Susan Sarandon, and James McAvoy. The project was largely an adaptation of the contents of the second novel of Herbert's Dune series, Dune Messiah, with some elements from the third book Children of Dune as well. This version of the shooting script is the "pink revision" draft, dated March 19th 2002, which was about three week before the actually shooting of the project commenced. The adaptation itself was broken into three parts, and was broadcast on the Sci-Fi Channel in March of 2003. The total runtime of the series ended up being around 6 hours, and it was nominated for a total of four Emmy awards, ultimately winning for best Visual Effects. The second page contains a printed visual family tree of the Atreides, Harkonnnen and Corrino Houses from the Dune Series. Binder with some minor smudges to the covers. The first page has some minor smudges and creases. Binder and pages in very good+ to near fine condition overall. (Inventory #: 47106)
$950.00 add to cart or Buy Direct from
Eric Chaim Kline Bookseller
Share this item

The Bible, that is, the Holy Scriptures contained in the Old and New Testament

London : Robert Barker, printer to the Queenes most Excellent Maiestie , 1616
(click for more details about The Bible, that is, the Holy Scriptures contained in the Old and New Testament)

Variola. (Smallpox) A Series of Twenty-One Heliotype Plates Illustrating the Progressive Stages of the Eruption of Smallpox over a period fourteen days

Boston : Samuel A. Powers , 1882
(click for more details about Variola. (Smallpox) A Series of Twenty-One Heliotype Plates Illustrating the Progressive Stages of the Eruption of Smallpox over a period fourteen days)
View all from this seller>