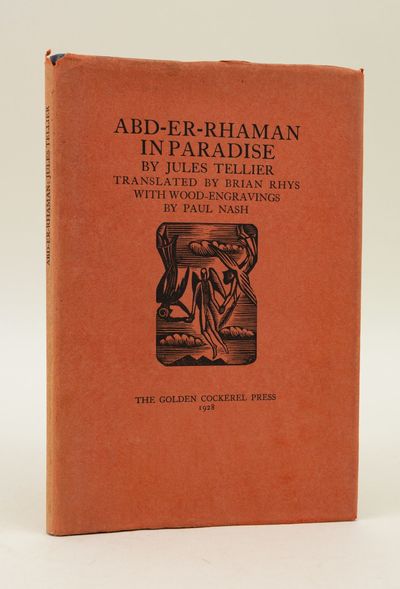 by (GOLDEN COCKEREL PRESS). NASH, PAUL, Illustrator. TELLIER, JULES
Waltham St. Lawrence: Golden Cockerel Press, 1928. No. 94 OF 400 COPIES. First Edition in English. 230 x 153 mm. (9 x 6"). 2 p.l., 34 pp., [1] leaf (colophon). Translated by Brian Rhys. Publisher's red marbled paper boards backed with blue buckram, flat spine with gilt titling. In the original red dust jacket with lettering and vignette by Nash on front cover. With title page vignette and four full-page woodcuts by Paul Nash. Chanticleer 60. For the illustrator: Colvin, "Paul Nash Book Designs." Dust jacket with small chip to head of spine and tiny snag to one corner, but a NEAR-MINT COPY--clean, fresh, and bright internally, in an unworn binding and fine dust jacket. With illustrations that, according to Colvin, "stylistically . . . mark the climax of Nash's representational wood engravings," this is the first appearance in English of Jules Tellier's "Les Deux Paradis," the story of a man offered the choice between the Muslim and the Christian heaven. On his deathbed, Abd-er-Rhaman embraces Christianity, but he clings at the same time to his strong belief in Mohammed. Thus, his soul is offered the choice of two heavens, and in this parable, he learns that the wisest are often those who dream no dreams. Little known today, Tellier (1863-89) was a French language poet, essayist, and novelist of considerable promise before his untimely death at age 26.

The illustrations here are among the relatively few wood engravings done by artist Paul Nash (1889-1946), considered one of the great landscape painters of the first half of the 20th century, and a leading figure in British Modernism. Nash had been a soldier and official War Artist during World War I, and like many survivors of the Great War, suffered from post-traumatic stress and had trouble readjusting to life after the war. He spent the next decade at a variety of endeavors, including teaching at the Royal College of Art and illustrating books, before turning his attention to painting full-time. His woodcuts have a distinctive style that was influential on his former pupil Eric Ravilious and other illustrators of private press books. This title is not especially rare in the marketplace, but it is difficult to find a copy as well preserved as the present one. (Inventory #: ST12683-312)
$442.00 add to cart or Buy Direct from
Phillip J. Pirages Fine Books
Share this item