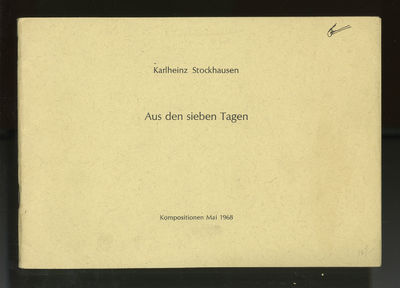 From the collection of musicologist Stanley Boorman, with his signature to upper outer corner of upper wrapper.

Aus den sieben Tagen (From the Seven Days) is a set of fifteen text compositions written in the turbulent spring of 1968. With such esoteric instructions as "Play a vibration in the rhythm of the universe," the work occupies a primary place in perceptions of Stockhausen's music. Yet when viewed in the context of Stockhausen's composition courses at Darmstadt, and how he worked with his students as composers and performers alike, it can be seen as more of a set of etudes. As Stockhausen's student and biographer Robin Maconie writes:

"From the time of its composition this collection of works has lived, somewhat uncomfortably for English-speaking audiences, with the image of a catechism, or series of spiritual exercises, to be practiced religiously for the good of one's soul. ... The moralistic implications of Stockhausen's studies have tended to overshadow their undoubted practicality as group exercises in mental gymnastics, of a kind already familiar to students of acting, who are taught to take mental and psychological preparation for a role extremely seriously, indeed, to a degree that makes Stockhausen's demands almost too simple." Maconie, p. 284.

"The leading German composer of his generation, [Stockhausen] was a seminal figure of the post-1945 avant garde. A tireless innovator and influential teacher, he largely redefined notions of serial composition, and was a pioneer in electronic music ... " Richard Toop in Grove Music Online. (Inventory #: 34249)
$55.00 add to cart or Buy Direct from
J. & J. Lubrano Music Antiquarians
Share this item