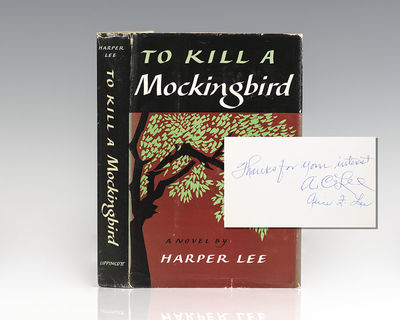 by Lee, Harper
Philadelphia: J.B. Lippincott Company, 1960. Third printing (published the same year as the first) of Lee's Pulitzer Prize-winning novel. Octavo, original green cloth backed brown boards, titles to spine in gilt. Signed by both dedicatee's on the front free endpaper, "Thanks for your interest A.C. Lee" and "Alice F. Lee." A.C. Lee was the inspiration for the character Atticus Finch and Alice took over her father's law practice after his death in 1962. Lee based the character on her own father, Amasa Coleman Lee, an Alabama lawyer, who, like Atticus, represented black defendants in a highly publicized criminal trial. Book magazine's list of The 100 Best Characters in Fiction Since 1900 names Finch as the seventh best fictional character of 20th-century literature. In 2003, the American Film Institute voted Atticus Finch, as portrayed in an Academy Award-winning performance by Gregory Peck in the 1962 film adaptation, as the greatest hero of all American cinema. In the 2018 Broadway stage play adapted by Aaron Sorkin, Finch is portrayed by various actors including Jeff Daniels, Ed Harris, Greg Kinnear, Rhys Ifans, and Richard Thomas. Near fine in a near fine dust jacket, which is an 11th printing. Jacket design by Shirley Smith. We have never seen another example signed by both A.C. and Alice Lee. To Kill a Mockingbird became an immediate bestseller and won the 1961 Pulitzer Prize for Fiction. The New Yorker declared it "skilled, unpretentious, and totally ingenious". It has gone on to become of the best-loved classics of all time and has been translated into more than forty languages selling more than forty million copies worldwide. Made into the Academy Award-winning film, directed by Robert Mulligan, starring Gregory Peck. It went on to win three Oscars: Best Actor for Gregory Peck, Best Art Direction-Set Decoration, Black-and-White, and Best Screenplay for Horton Foote. It was nominated for five more Oscars including Best Actress in a Supporting Role for Mary Badham, the actress who played Scout. In 1995, the film was listed in the National Film Registry. In 2003, the American Film Institute named Atticus Finch the greatest movie hero of the 20th century. In 2007 the film ranked twenty-fifth on the AFI's 10th anniversary list of the greatest American movies of all time. It was named the best novel of the twentieth century by librarians across the country (Library Journal). (Inventory #: 117865)
$6,500.00 add to cart or Buy Direct from
Raptis Rare Books
Share this item

They Came to Baghdad.

London : Collins Crime Club , 1951
(click for more details about They Came to Baghdad.)
View all from this seller>