The Narrative of an Explorer in Tropical South Africa. 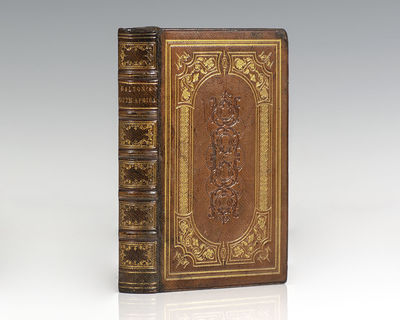 by Galton, Francis
London: John Murray, 1853. First edition of Sir Francis Galton's account of his expedition to South West Africa. Octavo, bound in full morocco with gilt titles and tooling to this spine six compartments within raised gilt bands, elaborate gilt tooling to the front and real panels within triple gilt ruling with fleuron cornerpieces and central motif stamped in blind, gilt turn-ins and inner dentelles, all edges gilt. Illustrated with maps, plates and woodcuts including tissue-guarded frontispiece in color. In near fine condition. Name to the pastedown. English Victorian era polymath, anthropologist, and geographer Sir Francis Galton joined the Royal Geographical Society in 1850 and soon mounted a difficult two-year expedition into then little-known South West Africa (now Namibia), accompanied by a party of nearly forty men. He compiled his findings in his Narrative of an Explorer in Tropical South Africa, published with the intent of filling in the previously unmapped areas lying between the Cape Colony and western Portuguese settlements, and extending to the interior as far as the recently discovered Lake Ngami. (Inventory #: 115371)
$600.00 add to cart or Buy Direct from
Raptis Rare Books
Share this item

by Mooney, Booth. With a foreword by Lyndon B. Johnson

New York : Simon and Schuster , 1988
(click for more details about 1999: Victory Without War.)
View all from this seller>