Looking Up the River 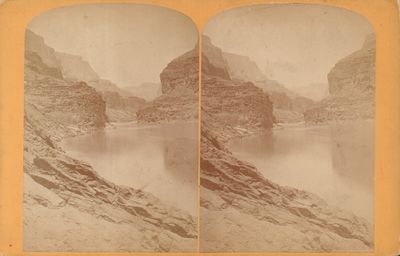 Stereoview
by Hillers, [John K. ]
Very Good. Stereoview. U. S. Geographical and Geological Survey of the Rocky Mountain Region, Views on the Colorado River, Grand Canon Series, No. 191. Bright yellow card with imprint on verso. Photo has light soiling and mount has light soiling and wear. Beautiful image of the Colorado River and the canyon walls. Photo taken circa 1873 by second Powell expedition member John K. Hillers. Although originally hired as a boatman, the German-born Hillers assisted Beaman and became the most prominent photographer of the expedition due to his enthusiasm for learning the techniques and willingness to carry heavy equipment. Powell had intended that his cousin Clem would assist, but he proved unenthusiastic. Powell fired Beaman, and hired another photographer Fennemore, who left the expedition because it was too physically strenuous. At this point, Powell made Hillers the head photographer, and after the Colorado River expeditions, he continued to work for Powell at the USGS and Bureau of Ethnology until his retirement. ; 4 1/2" x 7" . (Inventory #: 021650)
$225.00 add to cart Available from
Back of Beyond Books
Share this item