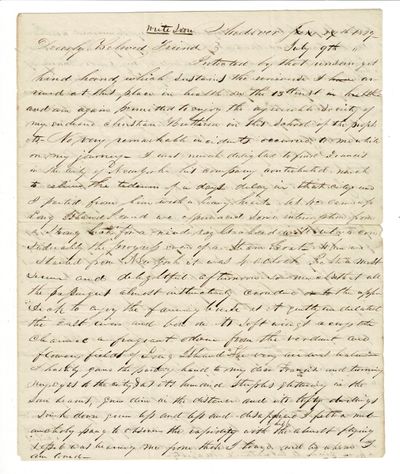 by Brainard, Thomas, Rev
Andover, [Mass.]: June 24 (crossed out), July 9th, 1829. 4to, previous folds, address on vesro of integral leaf and surrounded by text; short splits at the folds; all else very good. Rev. Thomas Brainard (1804-1866) studied law at Rome, N. Y., and in 1828 entered the Theological Seminary at Andover, graduating in the class of 1831. This newsy letter was written to his friend and mentor while still a student. Brainard writes: "Dearly beloved friend, Protected by that unseen yet kind hand which sustains the universe I arrived at this place in health on the 13th inst and am again permitted to enjoy the agreeable society of my endeared Christian brethren in this school of the people ... No very remarkable incidents occurred  to me while on my journey - I was much delighted to find Francis in the city of New York... and turning my eyes to the city & its hundred steeples glittering in the sun... grew dim in the distance ... I felt a melancholy pang to observe the rapidity with which the almost flying vessel was bearing me from that I loved and by whom I am loved." Brainard goes on to describe having memories of the "scenes of my childhood". He then resolves to be cheerful and "forget the past and future in surveying the wild rich variegated scenery which flows around the bank of the East River." The next morning he awakes to find the boat in heavy swells near the Connecticut River and describes the resultant seasickness aboard. He thanks Talcott for the Oneida Republican and "for the many instances of kindness  and affection you manifested me during my last visit ... I am certain that Mr. Finney (Rev. Charles G. Finney) has lately gone to the West, he may be in Rome, if so I shall glad to hear what is the result of his labours. I hope we shall both awake to a greater sense of our responsibility as Christians and strive to do from day to day every duty incumbent upon us... I am your dear friend T. Brainard." This letter is very briefly abstracted in the Life of Rev. Thomas Brainerd (sic) D.D. for thirty years pastor of Old Pine Street Church, Philadelphia" written in 1870 by his wife, Mary (Whiting) Brainard. (It is unclear when the spelling of his name was changed to Brainerd since he clearly spells it with an "a" in this letter). At first studying law in Rome, Thomas Brainard was ordained and settled as pastor of the Fourth Church in Cincinnati before going to Philadelphia. He died in Scranton, Pennsylvania, in 1866 and was a benefactor of the Women's Medical College there. Deacon Wait Talcott was born in 1807 in Hebron, Connecticut and died on 7 Dec 1890 in Rockton, Winnebago County, Illinois. Talcott went to Rome, New York, with his parents in 1810. In 1837, he emigrated to Illinois in 1838, and his family united with the First Congregational Church at Rockton. He was an avid abolitionist and a business man, who in 1854, went into the manufacture of the "J. H. Manny Combined Reaper and Mower," at Rockford, Ill., under the firm name of J. H. Manny & Co. Soon after this the company was sued by Cyrus H. McCormick, of Chicago, under the charge of infringing his reaper patents. In the autumn of 1854, Talcott was elected to the State Senate, representing the counties of Winnebago, Boone, McHenry and Ogle. He was one of the original incorporators of Beloit college, the Rockford Female Seminary, and was a member of the board of trustees of the college. Through his official position he was brought into acquaintance and friendship with Abraham Lincoln, who was then a candidate for the United States Senate. (Inventory #: 57113)
$172.50 add to cart or Buy Direct from
Rulon-Miller Books
Share this item