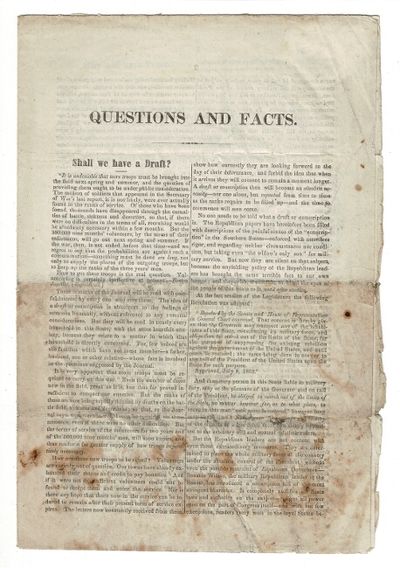 [New Hampshire, 1863. 8vo, pp. 8; text in double column; self-wrappers; old folds with lower half of first page soiled, one fold causing some wear to a couple lines of text; small edge tears; good. Democratic, anti-Lincoln campaign tract, composed and presumably printed in February 1863, addressed to the people of New Hampshire regarding the coming elections of 10 March 1863. It warns of an imminent draft (the Draft Act was enacted in 1863), a call for a peace resolution, issues complaints on the cost of the war and the performance of the Republican administration, and contains an account by Edson B. Olds, a former Representative of Ohio who was arrested for discouraging enlistment. The delineated sections in the text are: Shall we have a draft? -- Why not have peace! -- What are we fighting for? -- Facts and figures -- The president and his administration -- Arbitrary arrests. The letter that accused Olds claimed he complained of "tyranny engaged in a war to destroy the Union, overthrow the Constitution, and liberate the slaves." Sabin 67151 guesses the imprint as Boston 1862, but a cited document in the text is dated February 4, 1863 and the only direct reference is to the "People of New Hampshire." (Inventory #: 57077)
$172.50 add to cart or Buy Direct from
Rulon-Miller Books
Share this item

Franklin Center, Pa : The Franklin Library , 1978
(click for more details about Abraham Lincoln)
View all from this seller>