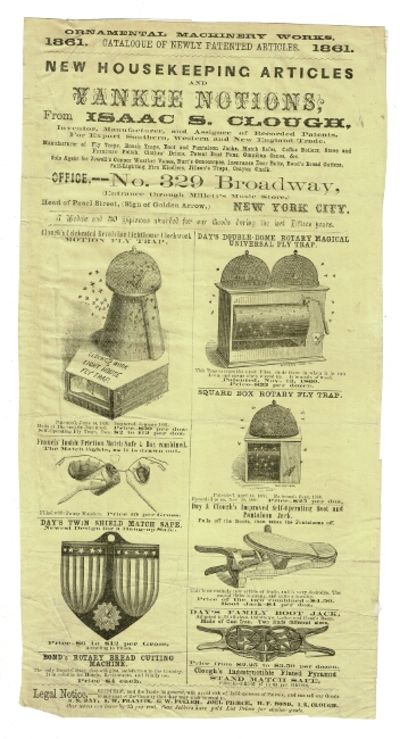 by Clough, Isaac S.
New York, 1856. 39 broadsides, labels, ads, calling cards, etc. all relating to the business ventures of Isaac S. Clough, a prolific inventor and salesman who concentrated mostly on the invention of novel insect traps, but who also sold ash sifters, pastry boards, spring boot jacks, combined knife, spoon and fork utensils, match safes, hand lanterns, an "automaton dancer" composed of two "negro-dancers" and string, and more. At least six different insect traps are represented, including a Premium Clockwork Pillar & Cage Fly Trap, and a Clock-Work Revolving Light House Fly & Mosquito Trap. The largest item is a broadsheet, 9.25" x 12" with a "Clough's Reporter" newsletter on one side and a large engraved illustration for a Suspension Cage New Fly-Trap on the opposite side. In addition to his inventions Clough also worked as a manufacturer, distributor, and a door to door salesman. Many of the ads are pointed at wholesalers, and two items are printed calling letters notifying a household of an imminent visit by Clough to sell them fire shovels, for example. A number of items cite Clough's number of medals and diplomas earned, with the number peaking at 19 and 33 respectively. Aside from this small change in accolades it is difficult to date most of the material. "Clough's Reporter," is dated 1860, one manuscript letter from the then governor of Massachusetts, Alexander H. Rice, congratulating Clough for his success in business, dated 1856. The calling letter from the Iron Clad Can Co. is dated 1876. The majority of the material is likely printed between the late 1850s and the early 1870s. Also included are a few New York banknotes signed by Clough and a receipt on letterhead for a tombstone ordered by him for Cypress Hills Cemetary. We could find little on Clough's life beside the fact that he appears to have been based in Brooklyn, NY. A few chips and holes in some items, but most generally very good, and an interesting group reflecting the world of late 19th century American industry. (Inventory #: 57145)
$1,725.00 add to cart or Buy Direct from
Rulon-Miller Books
Share this item