A memorial of the martyred Lovejoy: In a discourse by Rev. David Root. Delivered in Dover, N.H. Published by request 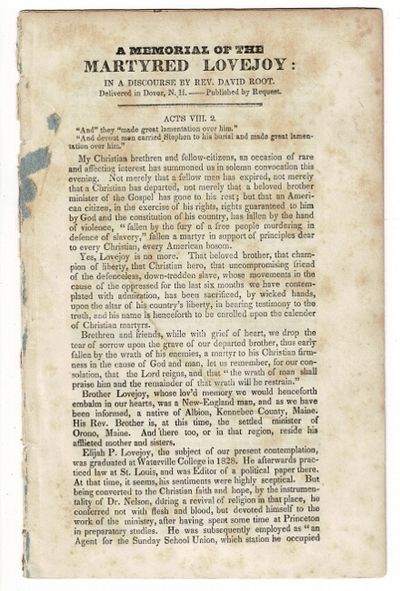 by Root, David, Rev
[Dover, N.H.], 1837. First edition, 8vo, pp. [1]-16; wrappers wanting; lightly foxed. Elijah P. Lovejoy (1802-1837) was an American minister, journalist and abolitionist. He penned many controversial tracts on emancipation and other contentious issues, and was killed by a pro-slavery mob in Alton, Illinois that staged an attack on abolitionist printing presses. Root was the author of several other antislavery and free speech tracts, e.g.: Fast Sermon on Slavery (1835); Liberty of Speech and of the Press... A Thanksgiving Sermon (1835); and Abolition Cause Eventually Triumphant (1838). American Imprints 46399; Sabin 73122. (Inventory #: 57062)
$97.75 add to cart or Buy Direct from
Rulon-Miller Books
Share this item