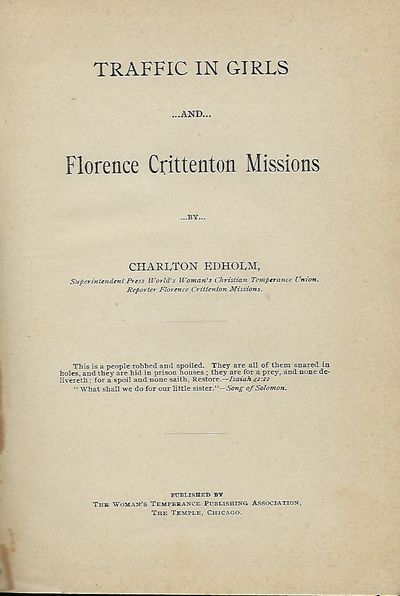 by EDHOLM, Charlton
The Temple, Chicago: The Woman's Temperance Publiashing Association, 1893. First Edition. A book about 19th century sex slave trade in child and human trafficking in America. The missions of Florence Crittenton offered a safe haven to runaway orphans, immigrant widows, and homeless, impoverished girls and women. Mary G. Charlton Edholm [1854-1935] was an American reformer and journalist. She worked as a journalist for twenty years. Edholm was appointed World's Superintendent of Press work, at the Boston Convention of the Woman's Christian Temperance Union (WCTU) in 1891. She became interested in the rescue work among traffic-ed girls and her book "The Traffic in Girls and Florence Crittenton Missions" was the result. Edholm became so interested in the plight of these betrayed and enslaved girls that she determined to make social purity work her specialty and continued to speak and write in their behalf. Small 8vo., black cloth, 307 pages. Illustrated.. Good (any stamping on binding is rubbed away; any preliminary pages: front endpaper, frontispiece, half-title?) are gone, first page is the title page; else contents clean & tight with hinges cracked but still tight). (Inventory #: 57068)
$75.00 add to cart or Buy Direct from Antic Hay Books
Share this item
Antic Hay Books
Offered by

NY : Chester Wolverton , 1889
(click for more details about MANALAPAN TOWNSHIP NJ MAP. FROM WOLVERTON'S "ATLAS OF MONMOUTH COUNTY," 1889)
View all from this seller>