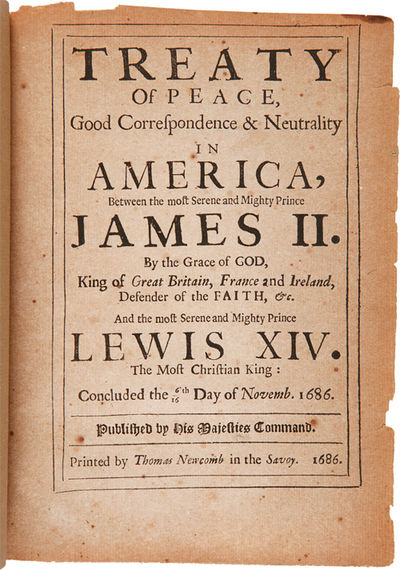 by [Treaty of Whitehall]
[London]: Printed by Thomas Newcomb in the Savoy, 1686. 19pp., plus [1]p. of ads. Small quarto. Modern three quarter calf and marbled boards, gilt morocco label. Stain to top edge of textblock (no text affected), some chipping to top edge of titlepage, one- inch closed tear to right edge of final leaf (no loss of text). Tanning to the exterior leaves. About very good. The Treaty of Whitehall is very important in the diplomatic history of North America in that it illustrates the way in which European powers sought to keep their colonial affairs in the Americas separate and distinct from any grievances that might occupy them in Europe, and to keep American disputes from potentially setting off a much larger conflict. This idea, generally known as the "doctrine of the two spheres," found its fruition in the Treaty of Whitehall. When James II succeeded his brother to the British throne in 1685, there were many points of conflict between France and England. Both he and Louis XIV were eager to avoid a colonial war which would disrupt commerce. This treaty settled many, but not all, problems in America, including agreements on fishing rights, the fur and Indian trades, and illegal smuggling. One of the most contentious issues addressed is that of the fur trade in Canada. In response to a British circumscription of their expansion of the fur trade, the French had been raiding Hudson's Bay Company establishments. Both sides pledged to cease these incursions, and they also pledged not to aid Indian tribes that might be in conflict against the other power. Most generally and most significantly, Savelle notes that by the Treaty of Whitehall "any rupture occurring in Europe between the two nations was to have no effect in America, where subjects of both nations were to continue 'in the same manner as if no such rupture had occurred in Europe.' Similarly, conflicts between nationals of the two countries in America were not to be considered causes for war in Europe." EUROPEAN AMERICANA notes four variant printings of this treaty by Thomas Newcomb in 1686, three in English and one in Latin. EUROPEAN AMERICANA 686/73. SABIN 96532. ESTC R477000. Savelle, THE ORIGINS OF AMERICAN DIPLOMACY, p.108. TPL 94. (Inventory #: WRCAM55580)
$3,250.00 add to cart or Buy Direct from
William Reese Co. - Americana
Share this item