Connecticut's Canterbury Tale, Its Heroine Prudence Crandall, and its Moral for To-Day 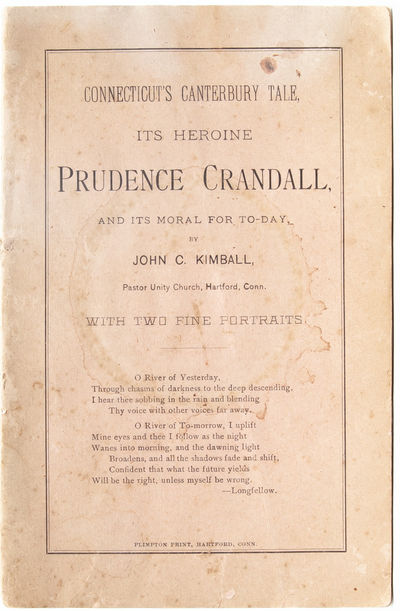 by [Womens Education] [African American Education] Kimball, John C.
Hartford, CT: Plimpton Print, 1885. First edition. Very Good +. Original drab printed wrappers. 16 pages with two portrait illustrations. A VG+ copy of this rare and delicate piece, due to some soiling and waterstaining to the front wrap, with associated bleed-through to the front endpaper. Rear wrap splitting near foot of spine but holding well. Internally clean and complete. Fairly scarce institutionally but even more so in trade, the present is the only copy on the market, with its only two appearances in the modern auction record appearing a century apart. In 1831, Prudence Crandall opened a private girls' academy in Canterbury, Connecticut, where she taught the privileged daughters of local families. "Ranked as one of the state's best schools, her rigorous curriculum provided female students with an education comparable to that of prominent schools for boys. In 1832, Crandall admitted Sarah Harris, an African American woman from a successful family, who sought to become a teacher. Local white parents were outraged, urging Crandall to expel Harris. She refused. When white parents withdrew their children, Crandall transformed her boarding school into the first academy for African American girls" (National Women's History Museum). While abolitionists and activists praised the move, agreeing that "young black women should attend female academies whether as an extension of their special charge as future wives and mothers, or as an assertion of their civil rights," the local white community attacked Crandall and her students (Jones). Crandall herself faced jailtime for violating the state's black laws; and when a mob attacked and vandalized the school in 1834, Crandall closed the school out of concern for her students' safety. Despite the school's closure, Crandall had made it possible for these young women "for the first time to enter public culture" (Jones); and Sarah Harris, at the center of it all, emerged as an activist and author. The present pamphlet, published 50 years later, reminds its readers both that this event happened and that it remains relevant to the activism of the time. After recounting in detail Crandall's family and educational history, the narrative of the school, her trial, and its closure, Kimball encourages readers to see that a moment of progress began with Crandall's refusal to turn away a single student because of her race. To Kimball, this is no small thing. "Syllable by syllable with many a sigh the world learns the speech of duty; generation by generation the vocabulary of goodness." Crandall and Harris were such syllables. As a new generation pushed the women's and abolition movements to their next waves, Kimball encourages them to remember and values these foundational moments from history. In 1886, after the release of Kimball's pamphlet, "Crandall received a small pension from the Connecticut state legislature. Her Canterbury school now houses the Prudence Crandall Museum, and she was named Connecticut's state heroine" (National Women's History Museum). Very Good +. (Inventory #: 3890)
$1,200.00 add to cart or Buy Direct from
Whitmore Rare Books
Share this item