The Giant Golden Book of Biology. An Introduction to the Science of Life 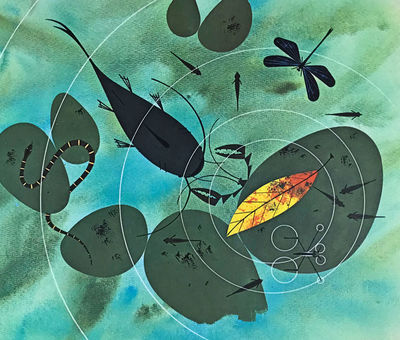 by [Harper, Charley]; Harper, Charles (illustrator); Ames, Gerald; Wyler, Rose; Wald, George (foreword)
New York: Golden Press, 1961. First edition of a landmark in American graphic design, artist Charley Harper's first major commission involving the depiction of animal life. Harper devoted a full year to The Giant Golden Book of Biology: "I had studied biology in high school and my first year of college, but to illustrate it, I had to REALLY study it. In the process, I became enthralled by the subject matter and have been illustrating it all my life." Harper depicts every aspect of biology, from the cellular to the planetary, in his immediately recognizable "minimal realist" style. First printing, with code A395395 on front pastedown. See Todd Oldham, ed., Charley Harper: An Illustrated Life (2007). A near-fine copy of an iconic book. Single volume, measuring 12.75 x 10 inches: 99, [1]. Original color pictorial laminated boards, color pictorial endpapers, color illustrations throughout text. Gift inscription, dated 1965, to title page. Scattered stray marks to binding, lamination beginning to peel at spine. No dust jacket, as issued. (Inventory #: 1002513)
$450.00 add to cart or Buy Direct from Honey & Wax
Share this item
Honey & Wax Booksellers
Offered by

London : Design for Today , 2017
(click for more details about A Bloomsbury Souvenir; with: Six Views of Bloomsbury (postcards))
View all from this seller>