Real Peace; A Strategy for the West 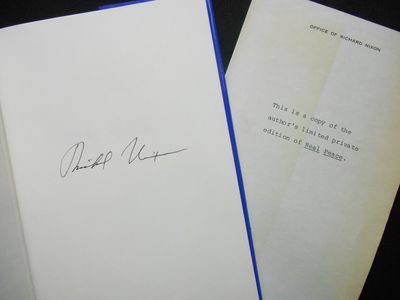 by Nixon, Richard
New York: [Privately Printed], 1983. First Edition. Hardcover. Fine/very good +. First printing, octavo size, 112 pp., signed by Richard Nixon, limitation slip loosely laid in. Richard Millhous Nixon (1913-1994), the 37th President of the United States, will forever be remembered for Watergate. This book was written almost ten years after his resignation from the office of the President, during a time when he was working to rehabilitate his image. During his time as President, he actually did much to bring peace to various parts of the globe; in 1972 he visited China which would result in the restoration of diplomatic relations between the two countries, initiated the Anti-Ballistic Missile Treaty with Russia, and he ended the involvement of the U.S. in the Vietnam War in 1973 (ending the draft at the same time). This the true first (private) printing of this work, with Nixon's signature in black ink on the front free endpaper, and a slip of paper loosely laid in with letterhead from the "Office of Richard Nixon", stating "This is a copy of the author's limited private edition of 'Real Peace'." ___DESCRIPTION: Bound in full navy blue cloth over boards, gilt lettering on the spine, signature of Richard Nixon on the front free endpaper; octavo size (8 3/8" by 5 5/8"), pagination: [i-vi] 1-106. In the publisher's dust jacket of blue with red and white lettering on the front panel and spine, back panel and both flaps blank. Limitation slip (stating "limited private edition" but not the size of the limitation) on printed letterhead with the statement typed, measures 8" by 5". ___CONDITION: Volume fine, with clean boards, straight corners without rubbing, a strong, square text block with solid hinges, the interior is clean and bright, and entirely free of prior owner markings; clean and as new. The dust jacket better than very good with minimal edgewear (most noticeable at the top edge, on the back panel near the joint), clean and complete, the red lettering on the front panel deep and slightly sunned on the spine. The limitation slip near fine, without soil or wear but with some light toning from contact with the dust jacket flap. ___POSTAGE: International customers, please note that additional postage may apply as the standard does not always cover costs; please inquire for details. ___Swan's Fine Books is pleased to be a member of the ABAA, ILAB, and IOBA and we stand behind every book we sell. Please contact us with any questions you may have, we are here to help. (Inventory #: 20071201)
$165.00 add to cart or Buy Direct from
Swan's Fine Books
Share this item

At the Back of the North Wind

Philadelphia : David McKay , 1919
(click for more details about At the Back of the North Wind)

Cape Cod; With Illustrations from Sketches in Colors by Amelia M. Watson

Boston : Houghton Mifflin and Company , 1896
(click for more details about Cape Cod; With Illustrations from Sketches in Colors by Amelia M. Watson)
View all from this seller>