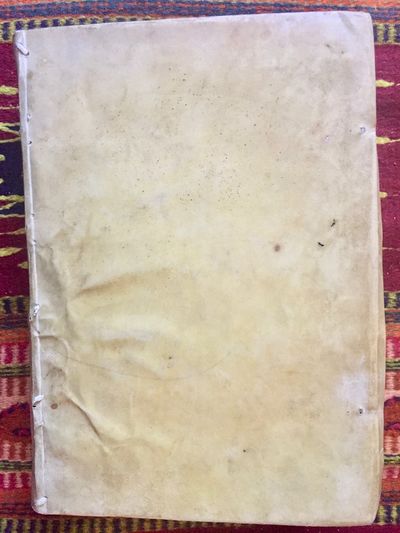 by Jesus Maria, Fray Juan de, OCD [Order of Discalced Carmelites]
Ucles, Spain: Convento de San Joseph, por Domingo de la Iglesia, 1624. First printing. Large (royal) octavo size, 29.5 x 22cm, title page, pp [16], 810, [26]; text in double columns, apparently printed at the Carmelite convent in Ucles. The decorated title page is by Juan (or Jus) Schorquens. Consists of letters written to people in various walks of life and facing various spiritual difficulties, advising them how to overcome them. E.g., "addressees" include the viceroys of Mexico and the Phillipines and various other government officials, but also letters to those suffering infirmities, different temptations, etc. The author [1560 - after 1632], was born in Sevilla, became a Carmelite in 1583, and two years later was sent to Mexico, which places him among the very first of his order to arrive in the New World. He became prior of the convent (or "desert" in Puebla, as well as in Mexico City. He wrote numerous works, not all of which were published, including an autobiography, which may still exist in the Bibliotheca Palafoxiana in Puebla: none of his books were published in Mexico. At the end of his life he returned to Spain, dying in a convent in Malaga. The present work is quite rare, never appearing at auction, and only a few copies listed on OCLC, none outside of Spain or France. The printing is interesting: as noted, it is a large book and required serious printing facilities, which make its printing in Ucles, and in a monastery, and apparently by another religious, quite remarkable. The printer Domingo de la Iglesia printed only 3 other items, all at the convent and all by or about the Carmelites, but none of this large size. Palau [123846] notes: "Libro interesante y uno de los primeros impresos en Ucles. Algunas epistolas se refieren a Nueva Espana, en cuyas lejanas tierras habito el autor..." Very good copy in the original vellum with edges of pages dyed red, title lettered on spine in Gothic script. (Inventory #: 7533)
$2,000.00 add to cart Available from Plaza Books
Share this item