The Life of Erasmus. More particularly that part of it, which he spent in England; wherein an account is given of his learned friends, and the state of religion and learning at that time in both our universities. With an appendix containing several original papers. 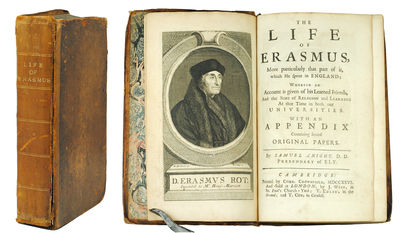 by Knight, Samuel.
Cambridge: Printed by Corn. Crownfield, and sold at London by J. Wyat, T. Edlin, in the Strand; and T. Cox in Cornhill, 1726. 8vo, (8), xxxi, (1) - list of plates and errata, 386, cxliv - Appendix, (8) - index. Engraved portrait frontispiece and 19 engraved plates, 5 of which are folding, (List of cuts calls for the frontis and 16 plates, but 3 additional plates which are not on the list are present at pages 335, 350 and 355). Old calf poorly rebacked, upper cover re-atached. Plates printed on poor paper and almost universally browned. § First edition. An important early biography of Desiderius Erasmus Roterodamus (Desiderius Erasmus of Rotterdam, 1466-1469) the Dutch theologian whose new editions of the New Testament are said to have been an important factor in the development of the Reformation. Bookplate of Edward Wilkins Fields. (Inventory #: 123221)
$495.00 add to cart or Buy Direct from
John Windle, Bookseller
Share this item

Edmonton : William Muir , 1885
(click for more details about The Book of Thel.)
View all from this seller>