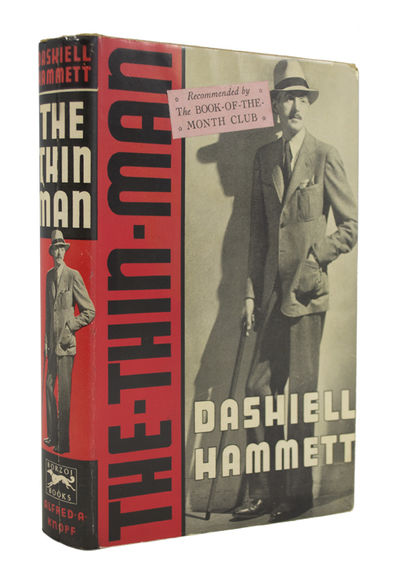 by HAMMETT, Dashiell
First Edition, In Original Dust Jacket HAMMETT, Dashiell. The Thin Man. New York: Alfred A. Knopf, 1934. First edition. Octavo. [x], [259], [1, colophon], [2, blank] pp. Original pale green cloth decorated in red and blue. Covers faded as always, with some very minor wear to head and tail of spine. In the publisherís red-variant pictorial dust jacket (with "Recommended by the Book-of-the-Month Club" sticker affixed, jacket with reviews on the upper inner flap and priced at $2.00 net). Jacket is very bright, with just minor chipping at extremities of the creases. A minor crease down the jacket spine. Some small color touch-ups to the jacket spine extremities. There are four variants of the jacket, of no established priority. Previous owner's small bookplate on front pastedown. Overall, an about fine copy with none of the usual fading to the spine of the jacket. "The Thin Man offered another sleuth, Nick Charles, who was to become as well known as Sam Spade" (Benet, The Reader's Encycopedia). The Thin Man introduces the married detectives Nick and Nora Charles; although they were featured in a series of six films, Hammett never wrote a sequel to the novel. Layman A6.1a. HBS 68351. $5,000 (Inventory #: 68351)
$5,000.00 add to cart Available from
Heritage Book Shop
Share this item

A general view of the variations which have been made

London : 1792
(click for more details about A general view of the variations which have been made)
View all from this seller>