Edward Coke, Oracle of the Law 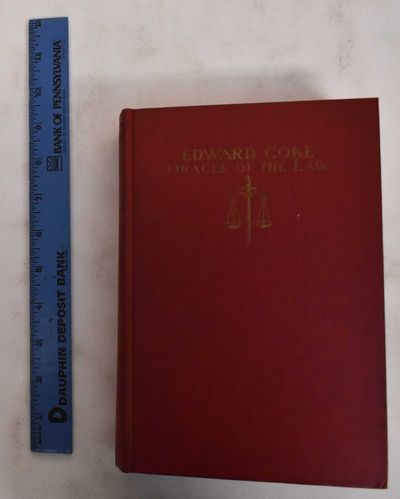 by Lyon, Hastings and Herman Block
Boston, New York: Houghton Mifflin Company, 1929. Hardcover. Good+ (foxing to block, and several of beginning and end pages. Pages are clear to read.). Red cloth boards with gilt lettering and design, top edge red tinted, bw frontispiece, viii, 385 pages, illustrated in bw plates, portraits, facsimile. Signed by author, Hastings Lyon, to previous owner on ffep. Title page reads, "Edward Coke, Oracle of the Law. Containing the Story of his Long Rivalry with Francis Bacon: Some Account of their Times and Contemporaries: Famous Trails in which Coke Participated: His Stand against King James I to Maintain the Supremacy of the Common Law: His Share in Wresting the Petition of Right from King Charles I: To which is added A Statement about the Law Writings of Coke on which Generations of Lawyers were Trained." Includes a list of the illustrations. (Inventory #: 178866)
$35.00 add to cart or Buy Direct from Mullen Books
Share this item

Snuff Bottles In The Collection Of The National Palace Museum

by Clair, Jean and Pierre Theberge

Ottawa, Canada : National Gallery Of Canada , 2008
(click for more details about The 1930s: The Making Of "The New Man.)
View all from this seller>