An Oration, Delivered February 24, 1775, before the American Philosophical Society, held at Philadelphia, for promoting Useful Knowledge 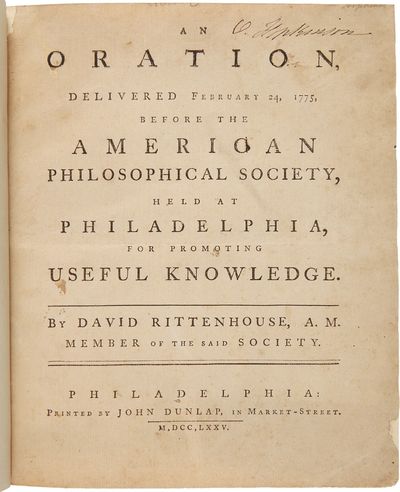 by Rittenhouse, David
Philadelphia: Printed by John Dunlap, in Market-Street, 1775. 27 pp., errata note at foot of final page. 1 vols. 4to. Late 19th century half brown cloth and marbled boards, spine gilt. Front and rear boards with two diagonal scrape-marks, minor shelf wear. Ownership signature on titlepage (see below). Small chip in lower foredge of titlepage, repaired. 27 pp., errata note at foot of final page. 1 vols. 4to. This copy bears the ownership signature on the titlepage of Oliver Hopkinson (1812-1905), the grandson of Francis Hopkinson, signer of the Declaration of Independence, author, composer, and Pennsylvania government official, and the son of Joseph Hopkinson, composer of "Hail Columbia," and a prominent Pennsylvania lawyer, judge, and politician.  Oliver Hopkinson himself trained as a lawyer and commanded a troop of Delaware volunteers in the Civil War, and was wounded at Antietam.  Though signed only by Oliver Hopkinson, it is almost certain that this copy descended in the Hopkinson family from the time of Francis Hopkinson who, as a member of the Continental Congress, was of the group to whom Rittenhouse dedicated this oration. David Rittenhouse's address was the third annual oration delivered to the American Philosophical Society, and the last before the Revolution interrupted the series for five years.  His nominal topic was the history of astronomy, concentrating on the period from Copernicus onward; but, according to his biographer, Brooke Hindle, he also "presented the essence of his own aspirations and beliefs, his own philosophy and religion...the oration was a public confession of faith."  Hindle devotes an entire chapter to this address, which he sees as a pivotal point in Rittenhouse's life, as well as an important statement in early American science.  The address was not published until the fall of 1775, and then was dedicated "To the Delegates of the Thirteen United Colonies, assembled in Congress at Philadelphia, to whom the future liberties, and consequently the virtue, improvement in science and happiness of America are intrusted." This title is extremely rare in the market, with copies at Anderson Galleries in 1904 and the Pennypacker copy in 1906 being the only other two to appear at auction.  A highly significant American scientific oration, delivered in the year before independence was proclaimed, printed by the printer of the Declaration of Independence, and owned by one of the delegates who signed that historic document. Sabin 71588; Evans 14432; Brooke Hindle, DAVID RITTENHOUSE, pp.112-22; Hideburn 3273. ESTC W21473 (Inventory #: 319109)
$17,500.00 add to cart or Buy Direct from
James Cummins Bookseller
Share this item
James Cummins Bookseller Inc.
Offered by

The Crock of Gold

London : Macmillan , 1930
(click for more details about The Crock of Gold)

My Consulate in Samoa. A Record of Four Years' Sojourn In The Navigators Islands, With Personal Experiences of Kin Malietoa Laupepa, His Country and His Men

by (Samoa) Churchward, William B.

London : Richard Bentley , 1887
(click for more details about My Consulate in Samoa. A Record of Four Years' Sojourn In The Navigators Islands, With Personal Experiences of Kin Malietoa Laupepa, His Country and His Men)
View all from this seller>