History of My Life. Twelve Volumes in Six 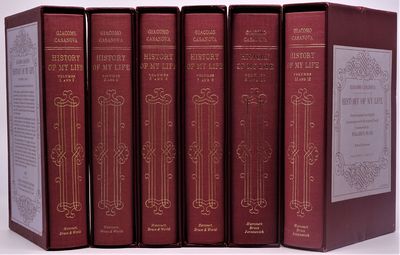 by Casanova, Giacomo (Chevalier de Seingalt); First Translated Into English by Willard R. Trask
New York: Harcourt Brace & World, Inc. , 1966. First Edition in English from the original French manuscript, it was not until 1966 that the German publishing firm of Brockhaus, which had owned the manuscript since 1820, allowed it to be published exactly as it had been written. Both the memoir and autobiography of the famed Italian adventurer and lover Giacomo Casanova, whose name became synonymous with a man known for his powers of seduction and having many lovers. Twelve volumes bound in six, in publisher's red cloth with slipcase, Near Fine, slight even sunning to spines, in Near Fine red cloth covered slipcases, light, discoloration at spine of Vol. I. A quite handsome, complete set, that will require additional postage for international and priority mail orders- please inquire before ordering. . First Edition in English. Cloth. Near Fine. 8vo - over 7¾" - 9¾" tall. (Inventory #: 008414)
$375.00 add to cart Available from
Dale Steffey Books
Share this item
Dale Steffey Books
Offered by

Any book is returnable for any reason within 10 days for a complete refund, as long as it is returned in the same condition as when received. Please notify in advance of return. I accept checks, money orders, Mastercard, and Visa.
More from this seller