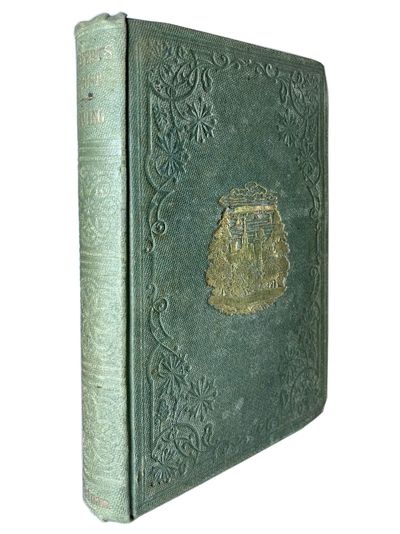 by Irving, Washington
New York: G. P. Putnum and Co., 1855 First edition, first printing, with frontispiece and vignette title page (pasted to stub of excised leaf or inserted? Publisher's original slate-green cloth, with central vignette in gilt surrounded by blindstamped rococo frame to upper cover, title and author to spine in gilt, light yellow endpapers. Very good, cloth lightly rubbed and with some faint soiling, but generally bright and clean. P. 383, line 3 from bottom "tho" for "the" in all 1855 and 1856 later printings. BAL 10188. "Wolfert's Roost" is the estate of Wolfert Acker (1667-1753), located in what is now Irvington, NY in Westchester County. Eckar Street (another recorded spelling of his name) in Irvington is also named for him. Wolfert Acker was privy counselor to Peter Stuyvesant, and later a deacon and elder at the Old Dutch Church of Sleepy Hollow, NY. The Acker family is referenced in Irving's story The Legend of Sleepy Hollow. The structure of Wolfert's Roost was burned by the British and no longer stands, but Washington Irving himself bought some of the land and built his estate, Sunnyside, from one of its other original buildings.. First Edition.. Hard Cover. Very Good. (Inventory #: WI018)
$150.00 add to cart or Buy Direct from
B & B Rare Books
Share this item