British Novelists and Their Styles: Being a Critical Sketch of the History of British Prose Fiction. 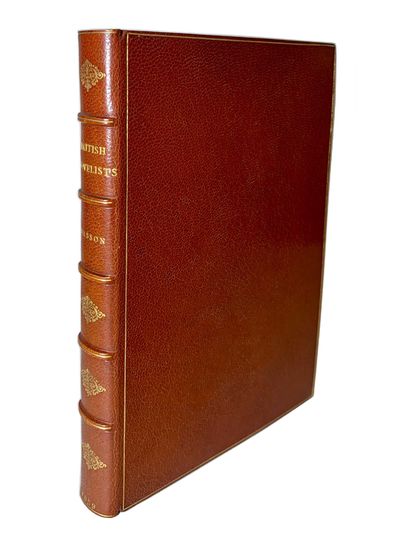 by Masson, David
Cambridge: Macmillan and Co., 1859 First edition. With prefatory note by author, one-page author's catalogue at rear. Finely bound by Riviere and Son in full brown morocco, boards ruled and spines stamped in gilt, top edge gilt, marbled endpapers. Fine, clean and fresh interiors, just touch of light foxing to a rear end leaf. David Masson was a Scottish author and professor of literature, who taught at University College in London and the University of Edinburgh. He also served as Historiographer Royal for Scotland, Chairman of the Scottish History Society, and President of the Edinburgh Sir Walter Scott Club. He is best known for his work on John Milton, having penned the six-volume Life of Milton in Connexion with the History of His Own Time (1858), and also edited his Poetical Works (1874). He was a supporter of the women's suffrage movement, alongside his wife, Scottish suffragette Emily Rosaline Orme.. First Edition. Hard Cover. Fine. (Inventory #: DMM001)
$175.00 add to cart or Buy Direct from
B & B Rare Books
Share this item