A Window in Thrums 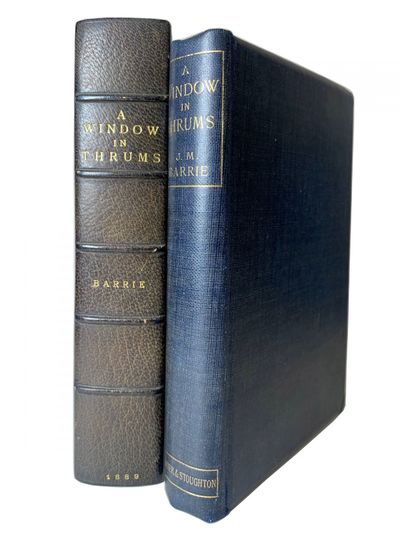 by Barrie, J. M. (James Matthew)
London: Hodder and Stoughton, 1889 First edition. Publisher's dark blue cloth, spine stamped in gilt, dark green endpapers. Very good, a few light spots to lower cover, spine lightly cracked before half-title, corners very lightly worn, pages clean and bright. A sturdy and attractive copy. In a custom half-leather slipcase with folding chemise that matches the book. J. M. Barrie was a Scottish author best known for his Peter Pan stories. He received his M.A. from the University of Edinburgh, and worked as a journalist and drama critic before he gained celebrity for his fiction. He began writing stories about the Scottish town his mother grew up in, which were published in the St. James's Gazette. These stories were expanded into this first three novels, Auld Licht Idylls, A Window in Thrums, and The Little Minister. Barrie served as Rector of the University of St Andrews, during which he presented his acclaimed address, "Courage," and as Chancellor of his alma mater. He bequeathed the rights of his Peter Pan works to the Great Ormond Street Hospital for Children in London, which receives revenue from them to this day.. First Edition.. Hard Cover. Very Good. (Inventory #: JMB023)
$100.00 add to cart or Buy Direct from
B & B Rare Books
Share this item