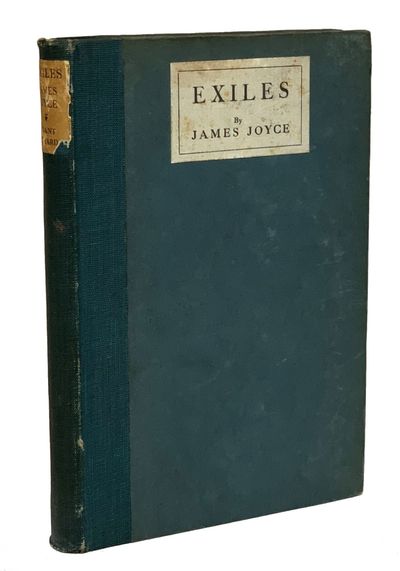 by Joyce, James
London: Grant Richards, Ltd., 1918 First edition, first printing. Publisher's dark green cloth and slate green boards, white paper labels lettered in black to the front board and spine. A very good copy, light wear to the corners, spine ends lightly rubbed, spine label toned and chipped, mild offsetting to pastedowns and endpapers. Slocum and Cahoon A14. Exiles, Joyce's only published play, was written in 1913 and published five years later on May 25, 1918. Drawn from Joyce's short story "The Dead" from his collection Dubliners (1914), the plot of Exiles focuses on a love triangle between the famous writer Richard Rowan, who recently returned to Dublin after nearly a decade of exile in Rome, Rowan's wife Bertha, and his old journalist friend Robert Hand. The Rowans bear resemblance to Joyce and his wife Nora, with whom he lived in self-imposed exile in Trieste, Switzerland while writing Exiles, but the play's autobiographical nature ends with this similarity. Many critics have drawn parallels between Exiles and the many plays of Henrik Ibsen, an author whom Joyce greatly admired. Joyce offered Exiles to William Butler Yeats for performance at the Abbey Theatre, but Yeats rejected the offer. The first major London performance of Exiles was in 1970 at the Mermaid Theatre under the direction of Harold Pinter. . First Edition. Hard Cover. Very Good. (Inventory #: JJ037)
$600.00 add to cart or Buy Direct from
B & B Rare Books
Share this item