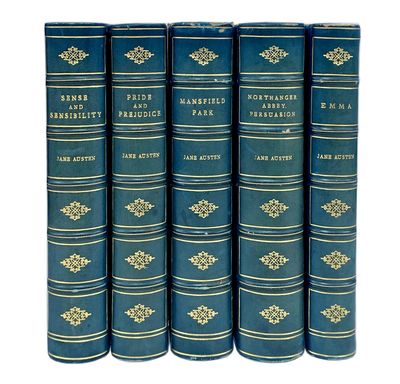 by Austen, Jane
London: Macmillan and Co., Limited, 1909 [1896]. Five volumes. Illustrated by Hugh Thomson, introduction by Austin Dobson. Later printing, first printed in "Macmillan's Illustrated Standard Novels." Finely bound in three-quarter blue calf and blue cloth boards, with gilt tooling to spines, top edge gilt, blue and pink marbled endpapers. Very good, each volume with rubbed corners, some additional scuffing to spine heads on Mansfield Park, Emma, and Northanger Abbey & Persuasion, Mansfield Park with more scuffing to top edge and a scratch to upper cover, small scuff to spine of Northanger Abbey. Overall, a very attractive set, finely bound and with charming illustrations. This collection includes the four major novels Austen published during her lifetime, along with Northanger Abbey and Persuasion, which were published together posthumously. Hugh Thomson first created over 150 illustrations for Pride and Prejudice, in 1894. Although it was published almost a century after the first edition, this edition is cherished because his signature pen and ink style perfectly captures the zeitgeist of the waning Victorian Era. He was known to complete meticulous research for his work, visiting the British Museum and the Victoria and Albert Museum to view clothing, architectural details, and furniture. After the success of his illustrated Pride and Prejudice, he went on to illustrate the rest of Austen's novels, which are presented here in a complete set. Thomson's illustrations are so beloved that he is even credited with bringing Austen's work back from obscurity; her popularity has endured ever since.. Hard Cover. Very Good. Illus. by Thomson, Hugh. (Inventory #: JA023)
$1,500.00 add to cart or Buy Direct from
B & B Rare Books
Share this item