The Republic of Mexico and Its American Creditors. The Unfulfilled Obligations of the Mexican Republic to Citizens of the United States, from Whom It obtained Material Aid, on Credit,--the Nature and Extent of That Aid 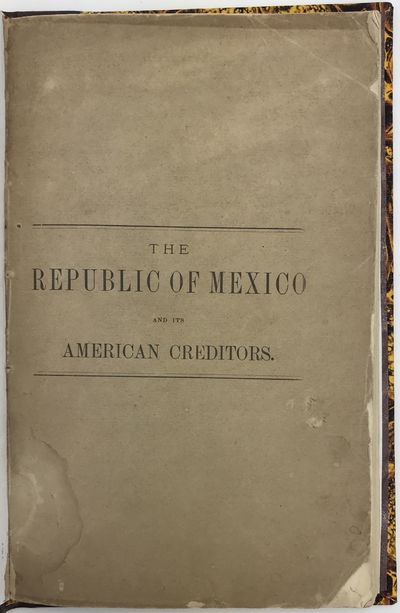 by Sturm, Herman
Indianapolis: Douglass & Conner, 1869. Good plus.. [2],iv,94pp. Original printed wrappers, bound into impressively lurid, modern half calf and marbled boards, spine gilt. Wraps chipped at corners, with some patches of light dampstaining. Light toning internally. A scarce Indiana imprint concerning the debts of Mexico to American citizens following the triumph of Republican forces over Maximilian and the end of the Second French Empire. The text comprises an account by the principal American agent for the Mexican government, Herman Sturm, a prominent Indianapolis businessman, German immigrant, and Civil War veteran, of his involvement in the plans and the subsequent failure of the Mexican government to repay its obligations. Sturm thoroughly chronicles his enlistment by Mexican officials in the scheme by which he funneled several millions of dollars in arms and money to Republican forces in Mexico, and denies all responsibility for, and indeed denounces the perceived Mexican "treachery" in their refusal to pay their creditors. He concludes by calling for the direct intervention of the American government on behalf of its citizens. His outrage, of course, did not stop him from accepting several railroad and mining concessions from the Juarez and Diaz governments later in his career. We locate about twelve copies in OCLC, and only the present copy in available sales records. A scarce and fascinating account of private American involvement in the Mexican Republican cause after the Civil War. (Inventory #: 1498)
$650.00 add to cart Available from
McBride Rare Books
Share this item