A Brother's Inquest, over a Brother's Grave, or the Question, Who Murdered Dr. John R. Goodwin? Candidly Considered. (An Appeal to the People of Brookville.) 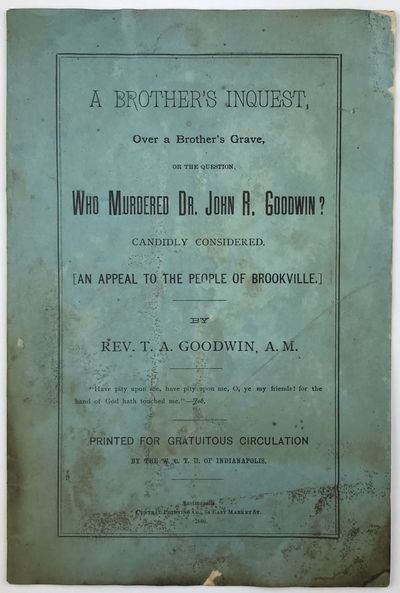 by Goodwin, Thomas A.
Indianapolis: Central Printing Co, 1880. Good.. 16pp. Original blue printed wrappers. Moderate soiling and wear, heavier to lower edge and outer leaves. Evenly toned. Scarce first edition of this pamphlet regarding the circumstances of the murder of John R. Goodwin in Brookville, Indiana, published under the auspices of the Women's Christian Temperance Union of Indianapolis. Goodwin was shot in the street by his brother Robert, who was mired in a drunken stupor. This appeal was penned by the Reverend Thomas A. Goodwin, another brother, and a prominent leader of the temperance movement in Indiana. The father of all three men, Samuel Goodwin, was also a leading figure for temperance in the state. "You have seen one of the best men that ever lived in Brookville shot down in your streets by this unchanged and unchangeable monster, and you have in jail, worse than dead, one of the brightest and best youths you ever knew, transformed into one of the worst men that ever tormented your rum-cursed town." A moving account and appeal by the brother of both victim and perpetrator of this tragic crime, and clearly a popular work, with two further, lengthier editions of this work were published in 1880 and 1881. OCLC locates fewer than ten copies of this first edition. (Inventory #: 1542)
$300.00 add to cart Available from
McBride Rare Books
Share this item