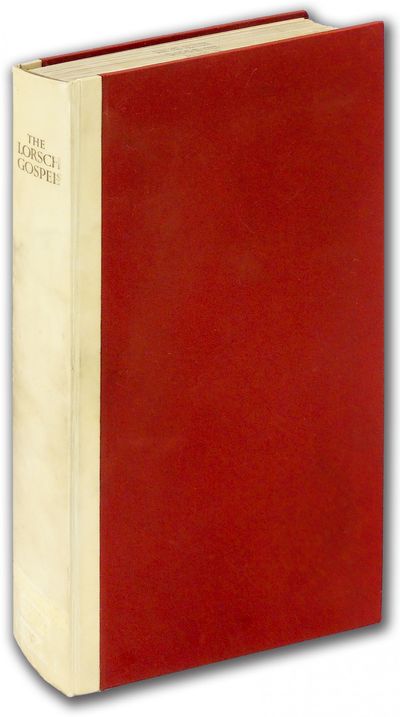 by Braunfels, Wolfgang (introduction)
New York: George Braziller, 1967. Hardcover. Very Good. Hardcover. Number 70 of 1000 numbered copies. This facsimile editon comprises the two parts of the Lorsch Gospels from the Biblioteca Documentara Batthyaneum in Alba Julia, Rumania, and the Bibliotexa Apostolica Vaticana in Rome. It was published on the initiative of Wolfgang Braunfels, who also wrote the introductory text accompanying the volume. Includes six color engravings. Printed in Germany on paper that resembles vellum and hand bound. Many pages are reproduced in black and white, but some are in full color. A thick, heavy folio bound in dark red cloth covered boards with vellum spine titled in gilt. Ex-library with evidence of removed call number label to foot of spine. Removed card pocket to rear endpaper. Minor soiling / rubbing to covers. Library stamp to fore-edges. Unpaginated. Includes an introductory booklet with text by Wolfgang Braunfels, 24 pages. The tipped in illustration at the rear of the booklet is present but detached. The booklet is bound in grey paper wrappers and appears to have once been attached to the front endpapers of the book, but is now loose (and laid-in). Tears and rubbing to endpapers where booklet was removed. Both the booklet and book are clean and bright overall. Minor roll to spine. A nice facsimilie edition. Lacks slipcase. ILL/090220. (Inventory #: 34501)
$150.00 add to cart or Buy Direct from
Kelmscott Bookshop
Share this item