GOV. FLETCHER. Gov. Fletcher and Hon. H.T. Blow will positively be in Liberty on Monday next (the 15th May,) and will address the people of Clay county.... [caption title & partial text] 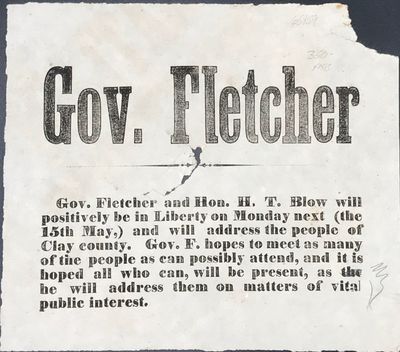 by Fletcher, [Thomas C.]
[NP: np, 1865. Broadside, 21.5 x 24.5 cm. One corner torn away and tear in blank center portion of text.This Missouri handbill advertises a community meeting at which then Governor Thomas Fletcher and Henry Taylor Blow, then a U.S. Representative would attend in Liberty, Missouri, on May 15, 1865. It states that the governor and congressman "will positively be in Liberty on Monday next (the 15th May) and will address the people of Clay County. Gov. F. hopes to meet as many of the people as can possibly attend, and it is hoped all who can, will be present, as the [sic- crossed out] he will address them on matters of vital public interest." Thomas Clement Fletcher (1827-1899) was the first native-born Missourian to serve as governor. A lawyer by occupation, he was appointed Assistant Provost Marshal General in St. Louis in 1861; serving in combat, he was wounded and imprisoned in Libby Prison until 1863. He also commanded the infantry in the Battle of Pilot Knob. After his 1864 election as governor, Fletcher issued an Emancipation Proclamation (11 January 1865) which freed all Missouri slaves nearly a year before the 13th Amendment to the U.S. Constitution was ratified. Fletcher was very sensitive to the issues of slavery and racial inequality and some of his political priorities as governor included the education of free black children, compensation for emancipated slaves, black suffrage, and the reduction racial crimes. Henry Blow (1817-1875) was born in Southampton County, Virginia. He was elected to the Missouri State Senate as a Republican in 1854, and then to the U.S. House of Representatives in 1863. He acted as the U.S. ambassadorial minister to Brazil in 1869-1870 before his death in Saratoga, New York, in 1875. As this meeting took place within a month of the end of the war, we presume it had to do with Reconstruction issues. (Inventory #: 65159)
$350.00 add to cart or Buy Direct from
Bartleby's Books
Share this item

NEW-HAMPSHIRE PATRIOT --- EXTRA. MONDAY, DECEMBER 8, 1828.... MESSAGE TO THE SENATE AND HOUSE OF REPRESENTATIVES