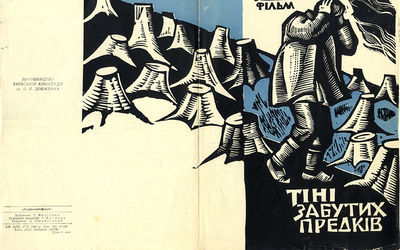 by Dovzhenko Film
Vintage original 8 x 6" (21 x 15.5 cm.) program, Ukarine. 4 pp., slight creasing at edge of pictorial wrappers, near fine. Ivan Mykolachuk, Larise Kadochnikova, dir: Sergei Parajanov.
Extremely scarce original program in Ukrainian (and printed in Kiev) for this Ukrainian film of visionary director Sergei Parajanov.
Parajanov's first film in which he fully expressed his remarkable poetic vision.
"One of the 20th century's greatest masters of cinema Sergei Parajanov was born in Georgia to Armenian parents and it was always unlikely that his work would conform to the strict socialist realism that Soviet authorities preferred. After studying film and music, Parajanov became an assistant director at the Dovzhenko studios in Kiev, making his directorial debut in 1954, following that with numerous shorts and features, all of which he subsequently dismissed as 'garbage'.
"However, in 1964 he was able to make Shadows of Forgotten Ancestors (1965), a rhapsodic celebration of Ukrainian folk culture, and the world discovered a startling and idiosyncratic new talent. He followed this up with the even more innovative The Color of Pomegranates (1969) (which explored the art and poetry of his native Armenia in a series of stunningly beautiful tableaux), but by this stage the authorities had had enough, and Parajanov spent most of the 1970s in prison on… charges of 'homosexuality and illegal trafficking in religious icons'. However, with the coming of perestroika, he was able to make two further films before succumbing to cancer in 1990." (IMDb.com) (Inventory #: WALTER-FILM001156)
$450.00 add to cart Available from WalterFilm
Share this item