Broca's Brain; Reflections On The Romance of Science 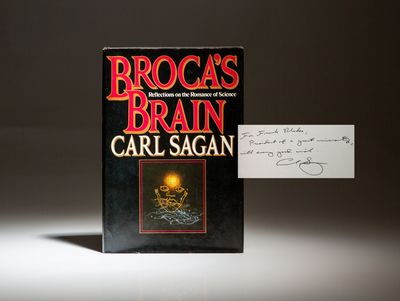 by Sagan, Carl [Cornell - Frank H.T. Rhodes]
New York: Random House, 1979. First Edition, Second Printing. Cloth. Near fine/near fine. First edition of Broca's Brain by astronomer Carl Sagan, inscribed to Cornell President Frank H.T. Rhodes.. Octavo, xv, 347pp, [2]. Black cloth, title in gilt on spine. The first edition, second printing, with corresponding number line on copyright page. Clean text, no extraneous marks. In publisher's dust jacket, $12.95 on front flap, light shelf wear, overall a near fine example. Inscribed by Cornell professor and astronomer Carl Sagan to the longtime president of Cornell, Frank H.T. Rhodes. Inscription reads: "For Frank Rhodes, President of a great university, with every good wish. Carl Sagan." An exceptional association copy. At the memorial service for Carl Sagan in 1996, Cornell President Frank Rhodes noted in his eulogy that "Sagan asked the big questions that others had given up. Not for him was the pursuit of science an activity of a closed and inward looking guild: for him, science was a means of public understanding and enlightenment." Rhodes would also note that while Sagan had no "earthshaking discovery at Cornell," he would be remembered more than most of the Nobel Laureates on campus because of his ability to communicate. (Inventory #: 2648)
$1,250.00 add to cart Available from
First Edition Rare Books
Share this item

Washington DC : The White House , 1979
(click for more details about Photograph Inscribed to Dorothy Maynor)
View all from this seller>