“No Such Army Since the Days of Julius Ceasar” Sherman’s Carolinas Campaign: from Fayetteville to Averasboro [Discovering Civil War America Series] 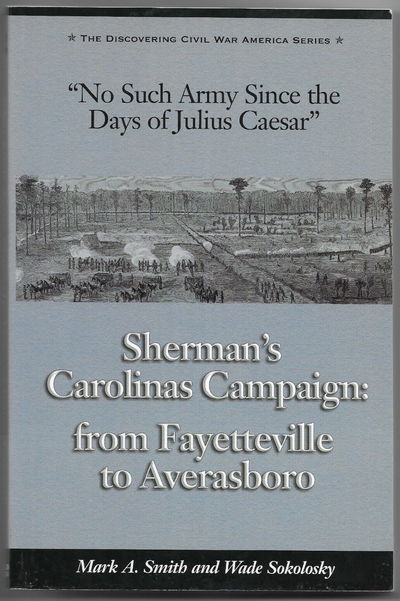 by Smith, Mark A.; Wade Sokolosky
Wraps, 14 by 21 cm, xix 260 pp., illus. Near fine, unread copy with only minor wear to the covers. From the publisher: "General William T. Sherman's 1865 Carolinas Campaign receives scant attention from most Civil War historians, largely because it was overshadowed by the Army of Northern Virginia's final campaign against the Army of the Potomac. However, a careful examination of this campaign indicates that few armies in all of military history accomplished more under more adverse conditions than did Sherman's. Mark A. Smith and Wade Sokolosky, both career military officers, lend their professional eye to the critical but often overlooked run-up to the seminal Battle of Bentonville, covering March 11-16, 1865. Beginning with the capture of Fayetteville and the demolition of the Arsenal there, Smith and Sokolosky chronicle the Battle of Averasboro in greater detail than ever tackled before in this, the third volume of Ironclad's 'The Discovering Civil War America Series.' In the two-day fight at Averasboro, Lt. Gen. William J. Hardee's Corps conducted a brilliantly planned and well-executed defense in depth that held Sherman's juggernaut in check for two full days. Having accomplished his objective, Hardee then broke off and disengaged. This delay permitted General Joseph E. Johnston to concentrate his forces in preparation for what became the Battle of Bentonville. The book includes new maps, abundant illustrations, and a detailed driving and walking tour for dedicated battlefield stompers." (Inventory #: 3760)
$20.00 add to cart Available from Bay Leaf Books
Share this item