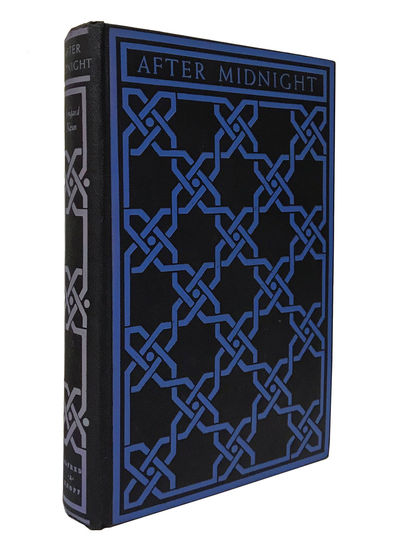 by Keun, Irmgard; Cleugh, James (translator)
New York: Alfred A. Knopf, 1938. First American edition of this cautionary tale, originally published as Nach Mitternacht by exiled German novelist Irmgard Keun (1905-1982). Keun's bestselling early novels Gilgi (1931) and The Artificial Silk Girl (1932), chronicling the lives of liberated "new women" in the Weimar Republic, were blacklisted by the Nazis as anti-German in 1933. After unsuccessfully suing the Gestapo for lost royalties, Keun fled Germany in 1936 and published After Midnight in Amsterdam the following year. Keun's firsthand experience of Nazi power and characteristic light touch give the novel a remarkable atmosphere of menace, as a group of friends in Frankfurt are torn apart by Hitler's rise before they fully understand what is happening: "Someone mentioned that Göring was going to broadcast that evening. . . . I said quite innocently that I'd rather not listen because he always made me feel as if I were being scolded. I said nothing more than that. But that was more than enough." After the Nazi invasion of the Netherlands in 1940, Keun's suicide was reported in the British press (a rumor likely planted by Keun herself); very much alive, she returned to Germany, where she lived under an assumed name until the end of the war. A near-fine copy of a scarce and unsettling novel. Single volume, measuring 7.25 x 5 inches: [8], 238, [2]. Original black patterned cloth stamped in bright blue, top edge stained blue. Spine panel sunned, no dust jacket. (Inventory #: 1002655)
$250.00 add to cart or Buy Direct from Honey & Wax
Share this item
Honey & Wax Booksellers
Offered by

[New York] : Gavin Brown's Enterprise , 2016
(click for more details about Love Is The Message, The Message Is Death)