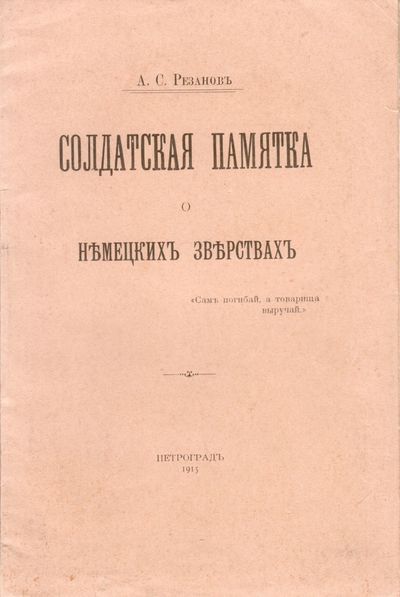 by Rezanov, A[leksandr] S[emenovich]
Petrograd: [Suvorin], 1915. Octavo (20.7 × 13.6 cm). Original printed wrappers on orange stock; 56 pp. Very good. Second edition; first published in 1914, of a rare report on atrocities against Russian soldiers and civilians committed by German soldiers during WWI, and based on oral reports by victims and witnesses as well as official documents. The book is divided into three chapters: "Nemetskie zverstva nad russkimi voinami" (German atrocities against Russian soldiers), "Muki nemetskogo plena" (Suffering in German capitivity), and "Nemetskie zverstva v russkikh zemliakh" (German atrocities on Russian territories). The author, Aleksandr Semenovich Rezanov (1878-after 1930), was a commander of the Russian Imperial Army and a specialist on counterintelligence who later served in the Justice Department. During World War I he was attached to the Northern Army and led investigations into the relationship between various Russian industrial circles and German espionage; during the Civil War, he served as a counterintelligence officer in Denikin's army. After the defeat of the White forces, he resettled in France. The "pamiatka" was a shortened digest of a lengthy work entitled "Nemetskie zverstva." As of August 2020, KVK, OCLC show no copies outside Germany. (Inventory #: P6503)
$350.00 add to cart or Buy Direct from
Bernett Penka Rare Books
Share this item


(click for more details about Pervoe maia 1901 goda [May 1st, 1901]. Along the head of front wrapper: Rossiiskaia Sotsial'demokraticheskaia Rabochaia Partiia (Russian Social-Democratic Labor Party))
View all from this seller>