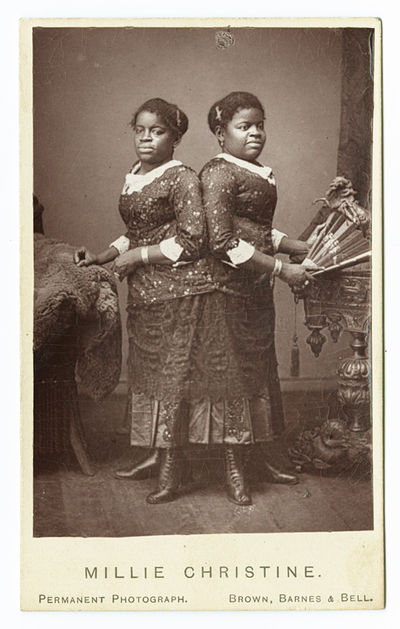 by [Millie Christine]
[Edinburgh, London, or Liverpool]: Brown, Barnes & Bell, 1882. Carte de visite photograph on printed card mount, 4 x 2 1/2 inches. Minor thumb-soiling to mount, some crazing to photograph. Photographic image with rich tonality. Overall very good. A small cabinet card photograph featuring Millie and Christine McKoy, the famous 19th- century singing sensation known as Millie Christine. The conjoined African-American twins were born into slavery in North Carolina in 1851, and their talent for singing and playing musical instruments was recognized at an early stage. Millie and Christine were taken from their parents and sold several times before finally being acquired by Joseph Pearson Smith. Just prior to the Civil War, while performing in New Orleans, the twins were kidnapped, and it took years for Smith to reclaim them, by which time they were legally free. They chose to remain under Smith's management and to continue their career. The McKoy sisters were freed by the Emancipation Proclamation and continued to tour internationally, including in the United Kingdom, as evidenced by the present photograph. The talented singers were successful enough to purchase the property where they were born and built a grand home where they lived until their death. In early October 1912, Millie died after contracting tuberculosis. Christine was unable to be safely separated and died the next day. Though they had separate personalities, they were often referred to with one name, "Millie- Christine" and are themselves quoted as saying, "Although we speak of ourselves in the plural, we feel as but one person." Millie and Christine, often called "The Two- Headed Nightingale," were also known as "The Carolina Twins" and "The Eighth Wonder of the World." The present image shows the sisters in a studio setting wearing a patterned dress with lace collars. The bottom margin is captioned "Millie Christine. Permanent Photograph. Brown, Barnes & Bell." This photographic firm had studios all over the United Kingdom, and the present photograph could have been taken in any number of them, but most likely in their most prominent locations in Edinburgh, London, or Liverpool. (Inventory #: WRCAM55926)
$725.00 add to cart or Buy Direct from
William Reese Co. - Americana
Share this item

FRUITS OF MORMONISM, OR A FAIR AND CANDID STATEMENT OF FACTS ILLUSTRATIVE OF MORMON PRINCIPLES, MORMON POLICY, AND MORMON CHARACTER, BY MORE THAN FORTY EYE-WITNESSES

Coloma, Ca. : Harmon & Springer , 1851
(click for more details about FRUITS OF MORMONISM, OR A FAIR AND CANDID STATEMENT OF FACTS ILLUSTRATIVE OF MORMON PRINCIPLES, MORMON POLICY, AND MORMON CHARACTER, BY MORE THAN FORTY EYE-WITNESSES)

Trinidad 1828
(click for more details about [AUTOGRAPH LETTER, SIGNED, FROM ROBERT NEILSON IN TRINIDAD TO JOHN L. ANDERDON IN LONDON, DISCUSSING THE LABOR FORCE AT ANDERDON'S BRECHIN CASTLE SUGAR PLANTATION IN TRINIDAD])
View all from this seller>