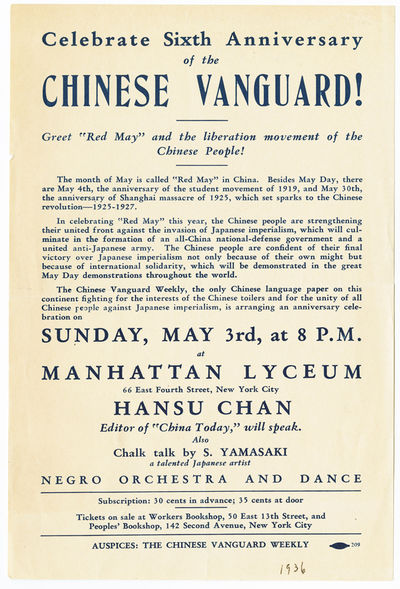 by [Chinese Americana]
[New York]: Chinese Vanguard Weekly, 1936. Handbill, 9 x 6 inches. Old folds, tiny chip to left margin. Near fine. A handbill advertising an event celebrating the sixth anniversary of the CHINESE VANGUARD WEEKLY, "the only Chinese language paper on this continent fighting for the interests of the Chinese toilers and for the unity of all Chinese people against Japanese imperialism...." The CHINESE VANGUARD was founded in San Francisco and then moved to Philadelphia before settling in New York. The weekly was created by leftist Chinese Americans after the communists and communist sympathizers were expelled from the Kuomintang in 1927. The text also calls for a celebration of "Red May": "Besides May Day, there are May 4th, the anniversary of the student movement of 1919, and May 30th, the anniversary of the Shanghai massacre of 1925, which set sparks to the Chinese Revolution - 1925-1927." Held at the Manhattan Lyceum on Sunday, May 3, at 8 p.m., the event promised to highlight China's coming triumph over Japanese imperialism, and featured presentations by Hansu Chan (a.k.a., Ji Chaoding), editor of CHINA TODAY, a "chalk talk by S. Yamasaki," and the "Negro Orchestra and Dance." It also notes that tickets are available at the Workers Bookshop (50 East 13th St.) and Peoples' Bookshop (142 Second Ave.). A thoroughly Communist event. (Inventory #: WRCAM55941)
$225.00 add to cart or Buy Direct from
William Reese Co. - Americana
Share this item

Washington : Government Printing Office , 1940
(click for more details about THE PECAN SHELLERS OF SAN ANTONIO THE PROBLEM OF UNDERPAID AND UNEMPLOYED MEXICAN LABOR)