Voigtlander and I : In Pursuit of Shadow Catching : A Story of Fifty-Two Years' Companionship with a Camera 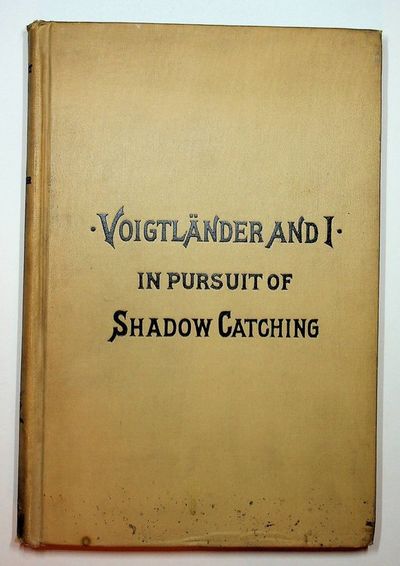 by Ryder, James F.
Cleveland, Ohio: The Cleveland Printing & Publishing Co / The Imperial Press, 1902. Cloth. Good. 251, [11-ads] pages. 8vo (6 1/2 x 9 1/2 inches). Tan cloth printed in black. Apparently inscribed by author and daguerrist James F. Ryder on the front flyleaf: "Percival Calverts(?) I am Very Truly Yours" in dark ink. There are some discrepancies between this signature and the one underneath the frontis (a printed signature) but given that Ryder would have been 76 years old by this point and working with chemicals much of his life in photography it could very well be "right". We've priced it however as an unsigned copy as this is certainly conjecture on our part. A well thumbed and read copy. Provenance: from the photographic reference library of John Craig. Cloth. "RYDER, JAMES F. (7 Apr. 1826-2 June 1904), photographer locally best known for encouraging ARCHIBALD WILLARD to paint The SPIRIT OF '76 and popularizing it through chromolithography, was born in Ithaca, N.Y. Inspired by the local daguerreotypist to purchase a camera, Ryder joined his establishment in 1847. In 1849, Chas. E. Johnson, a daguerreotypist from Cleveland, invited him to visit his studio. Ryder left Ithaca and became a traveling daguerreotypist, working in Kirtland, Painesville, CHAGRIN FALLS, and BEDFORD before settling in Elyria in 1850. Johnson asked Ryder to become manager/operator of his Cleveland studio, so for 2 years Ryder divided his time between Cleveland and Elyria. In 1868, Ryder introduced negative retouching to the U.S., paying the passage for Prof. Karl Leutgib from the Munich Academy to teach him the new process. As a result, Ryder received an award at a photography show in Boston in 1869. In 1872, Archibald Willard sent 2 paintings to Ryder's shop to be framed. Ryder displayed the paintings, and they became so popular he decided to make chromolithograph copies of the works, which became bestsellers across the country. Ryder encouraged Willard to paint The Spirit of '76 for the Centennial Exhibition. Ryder also photographed several U.S. presidents, most notably Pres. GARFIELD. Retiring in 1894, he produced his autobiography, Voightlander and I, in 1902. This was one of few autobiographical accounts produced by a 19th-century photographer. Ryder married Susan Park in 1852; they had one child, a daughter, named Susan. Ryder died in Cleveland and was buried in LAKE VIEW CEMETERY." (Case Western Reserve biography). (Inventory #: 28057)
$275.00 add to cart or Buy Direct from Kuenzig Books
Share this item

[ Bookseller Catalogues ] Robert A. Madle Catalogues Number 20 through 25 plus a folding list of magazine sets and long runs

by Madle, Robert A.

[ Broadside ] Christmas ANNOUNCEMENT. A. M. Thayer and Son with to say to the people of Duxbury [MA]...full line of Christmas Goods..

High St., W. Duxbury : A.M. Thayer & Son , 1881
(click for more details about [ Broadside ] Christmas ANNOUNCEMENT. A. M. Thayer and Son with to say to the people of Duxbury [MA]...full line of Christmas Goods..)
View all from this seller>